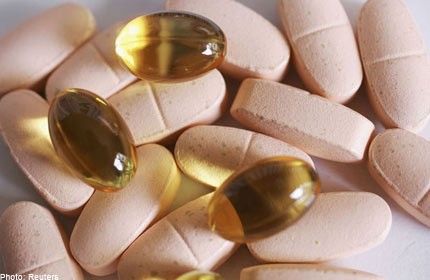 NEW YORK - Fish oil supplements may not do much to ward off heart attacks and strokes in people who already have heart disease, a new report suggests.

Research has been mixed on the possible heart-related benefits of omega-3 fatty acids, which are found in oily fish like tuna and salmon. The fatty acids, specifically those known as EPA and DHA, can also be taken as fish oil supplements, which run about 25 cents a day.

In the new analysis of past studies, there was no difference in the number of heart attacks, strokes or deaths among more than 20,000 people with heart disease who were randomly assigned to take either fish oil supplements or fish oil-free placebo pills.

"There is a common perception that fish oil supplements have been proven to prevent cardiovascular disease, and in fact the evidence has been inconsistent and inconclusive," said Dr. JoAnn Manson, head of preventive medicine at Brigham and Women's Hospital in Boston, who co-wrote a commentary published with the study.

"It's an important issue, because a large percentage of the population is taking fish oil supplements over-the-counter," she told Reuters Health.

Researchers from Korea combined the results of 14 studies that tracked heart disease patients taking fish oil or a placebo -- without knowing which they were getting -- for between one and five years. That included reports from the United States and India, as well as Italy, Germany and elsewhere in Europe.

The patients were mostly male and in their mid-60s, on average.

Those who were assigned to take the fish oil supplements were just as likely to have a range of heart-related emergencies, or to die, as study participants taking placebos containing vegetable oil or other substances not associated with heart health.

For example, in one study from the Netherlands, 14 per cent of people in either treatment group had a stroke or heart attack or needed a stent implanted over about three and a half years.

There were also no differences in deaths or other heart and blood vessel problems when the researchers looked specifically at people taking higher or lower doses of fish oil, or among those who took the supplements for only a year or two or for longer, Dr. Seung-Kwon Myung of the National Cancer Center in Ilsan and colleagues reported this week in the Archives of Internal Medicine.

Myung told Reuters Health in an email that he doesn't recommend people with or without a history of heart disease take the supplements to prevent future problems.

"At this point, we don't have enough hard-and-fast data to suggest routine supplementation with fish oil," said Alice Lichtenstein, a nutritional scientist at Tufts University in Boston who wasn't involved in the new analysis.

She noted that the studies included in the review tended to only cover a couple of years on the supplements -- and a heart attack or stroke can take much longer to develop.

Manson said the new findings shouldn't be the last word on fish oil, and larger, long-term studies are needed on its effect both in people with and without heart disease.

The most common side effect of the supplements is stomach aches.

For now, people should continue to follow recommendations, including those from the American Heart Association, that advise at least two servings a week of fatty fish, Manson concluded.

"Supplements will never be a replacement for a healthy dietary pattern, because often the healthier food choices such as fish can take the place of less-healthy food such as red meat," she added.

Lichtenstein agreed, and said that people considering taking fish oil supplements should talk with their doctors about options to improve heart health.

"There's no one magic pill," she told Reuters Health. "The real important thing is it's the whole lifestyle. It's the rest of the diet and it's also regular physical activity."