Parents, be mindful of your mood in front of your children

When she is having a tough day or is not in the best mood, Odette Umali tries to be mindful about how she comes across to her two children. The founder of Gordon Parenting, an education programme for parents in Hong Kong, believes that when parents are stressed out or dealing with emotional issues such as anxiety, anger or depression, they must be extra careful about what they say and how they act at home, so as not to affect their kids.

"Children pick up on their parents' moods more easily than you might think," says Umali, who has a 20-year-old daughter and a 15-year-old son. "When kids see that their parents are stressed, tired, angry, upset or irritated, they can't help but experience that negative energy as well.

"If it happens often enough, this negativity may affect the children's emotional and cognitive development. In time, parents may find that their kids can't relate to them or no longer want to spend time with them. They may stop sharing their problems with them or find it hard to express themselves verbally at home."

Umali is not wrong. According to Dr Florence Huang, a Hong Kong-based psychologist, children - younger ones, in particular - see their parents as role models and tend to imitate their behaviour. When parents express negative emotions, their kids may internalise this behaviour, with or without realising it.

"Children may experience these negative emotions as background anger," Huang says. "Of course, depending on the child's age and developmental level, he or she would internalise the experience differently. Toddlers and small children may react by showing anger or distress themselves, while older, schoolkids may withdraw emotionally or be less likely to react when confronted with negative emotions.

"When this state of experiencing anger and aggression at home is prolonged, the children's self-esteem may be affected, leading to self-blame and feelings of shame, humiliation and helplessness."

Dr Lim Boon Leng, a psychiatrist at Dr BL Lim Centre for Psychological Wellness in Singapore, agrees that young children are more susceptible to their parents' moods than older ones.

"Kids under three are still learning about emotional regulation, so if their parents show emotional instability they may react in a similar way, by crying more frequently and uncontrollably, throwing temper tantrums, or showing excessive fear or anxiety. They may even act more clingy towards their parents, develop phobias, or have problems eating or sleeping."

Lim adds that, in extreme situations where one or both parents are emotionally unpredictable or have frequent mood swings, the children may become psychologically traumatised and emotionally unstable themselves. These children are at a higher risk of developing depression, anxiety disorders and irregularities in personality.

Interestingly, scholars from Michigan State University in the United States revealed that the mental health of fathers has a stronger impact on children than that of mothers. The study, which looked at 730 families across the US, found that fathers' parenting-related stress had a harmful effect on their children's cognitive and language development when the children were two or three years old, even when the mothers' influences were taken into account.

It also discovered that the mental health of fathers and mothers had a similarly significant effect on behavioural problems among toddlers, and that depression symptoms in fathers when children were toddlers were more influential on children's later social skills than were similar symptoms in mothers. These findings were published online in two academic journals, Early Childhood Research Quarterly and Infant and Child Development.

"It's a given that negative emotions will exist in the home from time to time," says Lim. "The good news is that most children will not be too adversely affected by them and will, in fact, learn how to deal with them. It is also normal for parents to be in a bad mood and to be angry with their kid, provided, of course, the bad mood and anger outbursts aren't frequent, unpredictable or violent. So parents shouldn't feel guilty.

"Parents make mistakes so they should learn from them and try to do better next time. Mums and dads who are prone to stress should also learn how to manage their emotions by living a well-balanced lifestyle that includes sufficient rest and exercise." 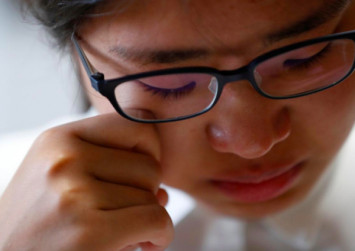 Self-awareness is also essential. Huang says that many parents simply aren't aware of the impact their words and actions have on their children's emotional, cognitive and social development.

"Some parents say, 'My kid will understand' - but why should they understand? Others say, 'They are just children, they won't get it' - but even young children are perceptive. Parents are the first role models for their kids, so their behaviour tells their kids what is acceptable and what's not.

"Parents should take responsibility for their behaviour, and yes, it's impossible to be happy and in a good mood all the time, but they should recognise when they start to feel angry, anxious or stressed, and ask themselves why they feel that way. When they know the reasons, they can address them so as to prevent being triggered again. Parents should remember that they have control over their mood and behaviour."

Umali says that, over the years, she has learned to recognise her mood triggers and regulate her emotions so as not to project how she feels onto her kids. She recommends that parents minimise their time with their children if they are really stressed or in a foul mood and to see to their own well-being first.

In addition, she tells her kids to remind her whenever her facial expression makes them feel scared or intimidated, or if the tone of her voice sounds harsh. Getting this support from them, she says, helps her be more mindful about how she's coming across to them.

"Mindfulness is definitely important - it's not just how you feel but also the words you use and the way you act when you're with your children. When you're self-aware you are in a better position to manage your emotions rather than have your emotions manage you.

"Of course, all this is easier said than done, considering the pressures parents are under these days, but you have to at least try, and the more you practise you'll find the more effortless it gets."