Psychiatrist who treated inmate who died didn't remember her 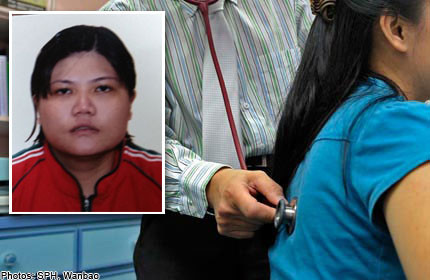 Psychiatrist who treated inmate who died didn't remember her

SINGAPORE - Ms Lian Huizuan, 27, was marching with other inmates in the prison yard when she was seen squatting down a few times.

When a prison officer encouraged her to continue marching, she said her legs were aching. But she decided to continue with the drill.

Later, as she was taken back to her cell, she was slow in climbing the stairs to the third floor, where she sat and leaned against the wall. She could not drink the water offered to her and was helped to the guardroom.

Two staff nurses who checked her eight minutes later had problems finding her pulse. Subsequent attempts to revive her failed as she was taken to Changi General Hospital and pronounced dead.

Before her death on March 2 last year, the mother of two children aged eight and 10 was undergoing treatment for depression, asthma and hepatitis C.

She had been seen by the Institute of Mental Health since 1997 and was put on psychiatric drugs. While in prison, she was treated with medication such as amitriptyline, chlorpromazine and valproate for her depression.

The cause of her death was determined on Jan 25 to be consistent with damage to the heart due to toxicity from these three drugs, in the presence of chronic hepatitis C infection.

Police investigations found that the prison psychiatrist was unaware of some issues Ms Lian faced that could have an effect on her life, including her pre-existing medical condition and the 11 occasions of fits, falls or faints she reportedly suffered from October 2010 to February last year.

Such information was in the Inmate’s Medical Records, which he had access to during sick parades, a dedicated time slot for inmates to report sick.

Too many patients, too little time?

Too many patients, too little time?

He had two hours to see about 30 patients - or four minutes per patient on average.

A four-time inpatient of the Institute of Mental Health (IMH), Lian was one of them.

She died on March 2 last year from a probable overdose of anti-depressants. She had been marching with other inmates in a drills exercise on the day.

Dr Tan Soo Teng, a witness in the inquiry into her death, told the court it was reasonable to conclude that he saw too many patients in the limited time.

The prison psychiatrist of 12 years saw patients once in three months on average, but he saw Lian about eight times from May 12, 2010 to Jan 12 last year.

"However, I believe things are never ideal. So I try to cope," he said of the number of patients.

On the same day he visited CWP, he would treat inmates at Cluster A (which houses inmates in five blocks) and the Changi Prison Complex Medical Centre, or nearly 100 patients in all.

The sheer number of patients meant he did not remember Lian, he said.

Asked by District Judge Janet Wang whether he could make another trip to the prison if he could not finish seeing all patients within that day, Dr Tan said he could go back if he chose to.

Not aware of falls

"But frequently there are restrictions. For example, if there is a ward round going on by the medical doctor, there may not be space for me to see patients," he said.

"There may be insufficient manpower to accompany me to see the patients."

In his 12 years of treating prisoners, he did not make additional trips to CWP, although he has done so for Cluster A when the prisons authority asked him to.

No additional trips were made of his own will, he said.

It emerged in court that while Lian had 11 occasions of reported fits, falls or fainting episodes from October 2010 to February last year, Dr Tan was aware of only two falls.

This was even though the 11 occasions were documented by CWP's general practitioner in her Inmate's Medical Records (IMR), which Dr Tan had access to.

Dr Tan said he did not see those notes which were in a different section of the IMR.

"It's a very thick stack of notes. Quite often, I have difficulty looking for them," he said.

But when Dr Tan saw her on Dec 7 that year, he was not aware of her falls.

"She did not inform me of such frequent falls," he said.

That day, he had written: "Patient said she had no fits, no tremors of hand, relevant and coherent."

Not the only one monitoring patient

While he said he monitored her closely - making notes to see her in one to two weeks' time, for example - he added he did not solely do this monitoring.

"There is a medical doctor (at the prison) every day to monitor the situation of the patients. If he feels something is psychiatry-related, I'd be informed."

The two falls he knew about, he found out from nurses, he said.

He said the falls could not simply be inferred as the result of the medicine he prescribed.

"There are many reasons why a person falls down... because of weak knees, joint pain," he said.

Lian's post-mortem blood amitriptyline level had been found to be 19 times the upper limit of its therapeutic level.

Associate Professor Teo Eng Swee, who carried out the autopsy, concluded Lian's death was consistent with damage to the heart from amitriptyline toxicity, with simultaneous use of two other psychiatric drugs, chlorpromazine and valproate.

Before her time at CWP, Lian had been prescribed chlorpromazine and valproate in combination with other drugs like Faverin.

Dr Tan said he had replaced Faverin with amitriptyline as "she (Lian) was distressed by her inability to sleep and I felt it would be better (for its sedative effects)".

He said the drug had been used for many decades for treating depression and was used by neurologists for headaches and migraines.

Lapses in adherement to requirements

An independent expert and psychiatrist at IMH, Dr Tejpal Singh, had said the three drugs Lian took in CWP should have been prescribed together only with caution.

"If possible, (they) should not be prescribed together," he said. Adequate monitoring should be done if the three medicines were used together, he said.

But Dr Tan disagreed, saying the combination was frequently used and he had considered the side effects of these drugs when taken together.

Still, he said he was not aware of other aspects of her medical condition, including the fact that she had polydipsia (excessive water intake) and how severe her hepatitis C was.

"If I could read the pathologist report now, and had knowledge of the falls, if I could turn back the clock, of course I would have changed (my prescription)," Dr Tan said.

Investigations also showed that while five liver function tests were done for her, other tests such as electrocardiograms to monitor the heart condition were not given.

The investigation also found that nurses from the Raffles Medical Group, the medical service provider to the Singapore Prison, failed to conform to requirements set by the Changi Women’s Prison to record all dispensation of medication into the prescription chart.

They had explained that the prescription chart was filled up based on memory and that mistakes on the chart did not mean wrong dosages were given.

They said they followed an older process of referring to the packet label while packing and dispensing medicine, but the police have been unable to retrieve any records of packet labels as these have been disposed of.