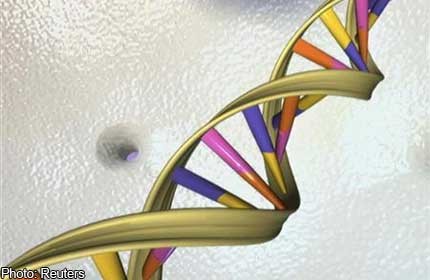 A DNA double helix is seen in an undated artist's illustration released by the National Human Genome Research Institute to Reuters.

NEW YORK - If Hollywood needs a plot for a medical thriller, scientists at the National Institutes of Health have one: Doctors, using cutting-edge technology called whole-genome sequencing, trace an outbreak of a deadly bacterial infection, identify precisely how it's spreading - and in the final minutes sic poison-spewing robots on the rampaging microbes.

That's essentially what scientists did when Klebsiella pneumoniae, an often-lethal bacterium, spread through NIH's research hospital in Bethesda, Maryland last year, as described in a study published on Wednesday in the journal Science Translational Medicine.

"With whole-genome sequencing," said microbial geneticist Julie Segre of NIH's National Human Genome Research Institute, who led the study, "we were able to understand how the outbreak was moving through the hospital and identify weaknesses" in infection-control practices, finally halting the outbreak.

The unprecedented effort to use genome sequencing to save patients from an infectious outbreak offers hope that the technique could fight other hospital-acquired infections. These infections kill some 99,000 people die from such infections in the United States every year, estimates the US Centers for Disease Control and Prevention. The added health-care costs, according to the CDC: US$4.5 billion (S$5.6 billion) a year.

Researchers were able "to implicate 'Patient Zero,' track transmission of a drug-resistant bacterium over the course of an important outbreak and provide insights that will inform infection control and patient care," said Lipkin, director of the Center for Infection and Immunity at Columbia's Mailman School of Public Health and a scientific adviser on the 2011 film "Contagion."

The outbreak at NIH's hospital began last summer. In June a 43-year-old patient with antibiotic-resistant K. pneumoniae, which infects the urinary tract and bloodstream and can cause sepsis, a blood infection, was transferred to its intensive-care unit from a New York City hospital. "Patient Zero" was put in an isolation room; staff and visitors had to wear gowns, masks and gloves to enter.

Three weeks after she was cured and discharged in July, a second patient was found to be infected with K. pneumoniae. Since he had not been on the same ward at the same time as Patient Zero, physicians believed he probably acquired it elsewhere.

New cases began appearing at a rate of one a week, and soon there were 17. Eleven patients died.

DNA fingerprinting, the 30-year-old technique that identifies a handful of genes, was too crude to reveal whether these infections were identical to Patient Zero's. If they were, something had gone badly wrong with the 243-bed hospital's infection control. If they weren't, a second source had to be identified.

"If we had a second, separate introduction, then the isolation procedures for the first patient had worked," said Segre. "But if we had transmission in the hospital, then they didn't, plus our surveillance (which had not detected any K. pneumoniae before another patient was found to be infected) failed to detect that pneumoniae was spreading and silently colonizing patients."

Segre and her colleagues began sequencing the genomes of bacteria collected from patients, using technology from 454 Life Sciences, part of Roche Holding AG (which also made a cameo in "Contagion").

The bacterium was evolving like a nightmarish sci-fi bug, acquiring about one new mutation a week, estimates Segre. With US$40,000 worth of whole-genome sequencing, she and her team were able to compare each patient's bacteria to others', eventually inferring the outbreak route.

Verdict: All 17 patients acquired their infection from Patient Zero, either directly or indirectly.

"The genomic data is indisputable," said Segre. "There were weaknesses in the infection-control system." The deadly microbe had travelled from Patient Zero to the others, via hospital staff or equipment (on which it could survive, the scientists discovered, even after the equipment that had been thoroughly cleaned).

Some possible routes of transmission were absolved: The microbe was not spreading via wound care, so the staff did not have to make changes there.

The hospital did make radical changes in other practices, though. "Equipment used in the isolation ward was no longer used elsewhere, and staff who worked there didn't work anywhere else," said Segre.

After a patient infected with K. pneumoniae vacated his room, because he was cured or died, a robot blasted the space with a vapour of bacteria-killing hydrogen peroxide. The maintenance department ripped out sinks and drains that could have harboured the bug.

Hospitals and long-term-care facilities, which also often experience infectious outbreaks, could become significant markets for sequencing companies. Roche, in a statement to Reuters, says "an obvious application" of DNA sequencing is "to define transmission pathways of pathogens and to support outbreak investigations."

DNA sequencing could be a US$1 billion market in the United States alone, estimated Pathogenica, a privately owned Cambridge, Massachusetts company founded in 2009. Its first product is the US$2,950 HAI (Hospital Acquired Infection) BioDetection Kit. It can test 48 samples for the presence of 12 pathogens (including K. pneumoniae), using telltale genomic regions.

Might cash-strapped hospitals and nursing homes balk at the cost? "When you have patients in your ICU who just paid US$100,000 for an organ transplant," said Segre, spending a few thousand dollars to protect them from an outbreak of deadly bacterial infections "doesn't seem like too much to ask."