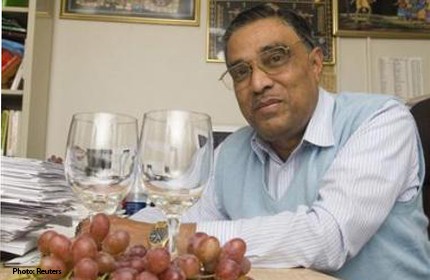 A University of Connecticut researcher who studied the link between aging and a substance found in red wine has committed more than 100 acts of data fabrication and falsification, the university said Wednesday, throwing much of his work into doubt.

Dipak K. Das, who directed the university's Cardiovascular Research Center, studied resveratrol, touted by a number of scientists and companies as a way to slow aging or remain healthy as people get older. Among his findings, according to a work promoted by the University of Connecticut in 2007, was that "the pulp of grapes is as heart-healthy as the skin, even though the antioxidant properties differ."

"We have a responsibility to correct the scientific record and inform peer researchers across the country," Philip Austin, the university's interim vice president for health affairs, said in a statement.

The university said an anonymous tip led to an investigation that began in 2008. A 60,000-page report -- the summary of which is available at bit.ly/xkyS4A -- resulted, outlining 145 counts of fabrication and falsification of data. Other members of Das' laboratory may have been involved, and are being investigated, the report continues.

UConn has "declined to accept US$890,000 in federal grants awarded to" Das, according to the statement, and has begun dismissal proceedings. The university has alerted 11 journals that published Das' work, and has also worked on the case with the U.S. Office of Research Integrity, which investigates alleged misconduct by federal grant recipients.

The journals include Antioxidants & Redox Signaling, where Das was one of the editors in chief, and the Journal of Agriculture and Food Chemistry.

Although many scientists have been skeptical of various claims made about resveratrol, it has garnered significant commercial interest. GlaxoSmithKline bought Sirtris, a company that worked on the compound in 2008 for US$720 million, but later discontinued work on one version of a drug that mimics its activity because of disappointing results.

A Las Vegas resveratrol maker called Longevinex has promoted Das' research, and he appears in a lengthy video touting the nutrient as the next aspirin.

Das also shared a 2002 patent on the use of another compound in grape skins called proanthocyanidin to prevent and treat heart conditions.

Other scientists have taken notice of Das' work, citing 30 of his papers more than 100 times each, according to Thomson Scientific's Web of Knowledge. Last year, he won an award from the International Association of Cardiologists.

Still, one aging researcher said the impact of the fraud on the field will be minimal.

"There are many investigators who are working on resveratrol," said Dr. Nir Barzilai, of Albert Einstein College of Medicine. "That doesn't mean we know the whole truth. But Rome wasn't built on Dr. Das."

Das, who could not be reached for comment, said in a 2010 letter to university officials that the investigation was a "conspiracy" against him. The work was "repeated by many scientists all over the world," he wrote.

"As you know, because of the development of tremendous amount of stress in my work environment in recent months, I became a victim of stroke for which I am undergoing treatment," he wrote in a separate letter.