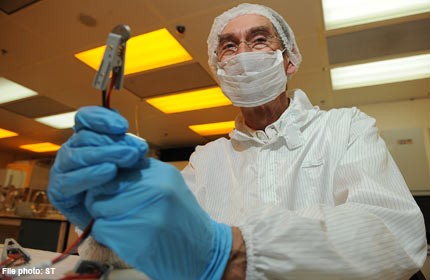 PARIS - Researchers said Monday they were a step closer to developing a vaccine against the type of meningitis that mostly affects Europe and North America and kills hundreds every year.

A trial in adolescents in Australia, Poland and Spain showed them developing an immune response without serious side-effects, according to a study published in The Lancet Infectious Diseases medical journal.

After taking the drug, the test group generated antibodies that are active against 90 per cent of strains in the meningitis B group affecting the United States and Europe.

"Our data suggest that this vaccine is a promising and broadly protective meningococcal serogroup B vaccine candidate," said study lead author Peter Richmond from the University of Western Australia's School of Paediatrics and Child Health.

Meningitis, an inflammation of the lining around the brain and spinal cord, mostly targets teenagers - with a fatality rate of between five per cent and 14 per cent.

Vaccines exist against types A and C meningitis, but none that is broadly effective against strains in serogroup B, mostly prevalent in industrialised nations.

Type A is the primary cause of epidemic meningitis in Africa.

"The results showed that three doses produced an immune response, indicating protection, in 80 per cent to 100 per cent of adolescents," said a statement.

"Mild to moderate pain at the injection site was the most commonly reported side effect."

The authors said further trials must be held to determine the duration of vaccine protection.

"If additional studies show similar immunogenicity (the ability to produce an immune response) and tolerability, this vaccine might help to reduce the global burden of invasive meningococcal disease," said Richmond.