Russia to step up drink-driving punishments 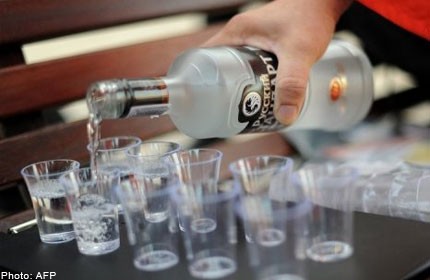 Russia to step up drink-driving punishments

RUSSIA - Russia will introduce tough punishments for drunk driving of up to 15 years in prison and US$16,000 (S$19,559) in fines to combat the "horrific" annual death toll on its roads, Prime Minister Dmitry Medvedev said Saturday.

Medvedev said that around 28,000 people lost their lives in road accidents last year in Russia - one of the highest tolls in the world - even though the fatality rate has been falling in recent years.

"The road tragedy statistics are still horrific... None of us are without blame and we have to start with ourselves," Medvedev said in a video blog posted on the government website.

The video - viewable at blog.da-medvedev.ru - begins with Medvedev sweeping around the driveway of his residence at the wheel of a black jeep, conspicuously wearing a safety belt.

He said the government would put forward legislation that would introduce a minimum punishment of five years in jail and a maximum of 15 years for causing death while drunk at the wheel.

Drunk drivers who are found speeding or jumping red lights will face massive fines of 500,000 rubles (S$19,559) in Moscow and Saint Petersburg and 250,000 rubles in other regions.

Medvedev's video blog - his favoured form of floating new ideas - appears to be a response to a string of highly publicised accidents that have made the public more aware of road safety problems in Russia.

Prominent Russian actress Marina Golub was killed in a traffic accident in October while travelling in a taxi hit by a speeding car.

And in one particularly horrific incident in Moscow in September, a drunk driver rammed a bus stop at high speed and killed seven people including five orphans from a children's home.