Sending a sick kid to school 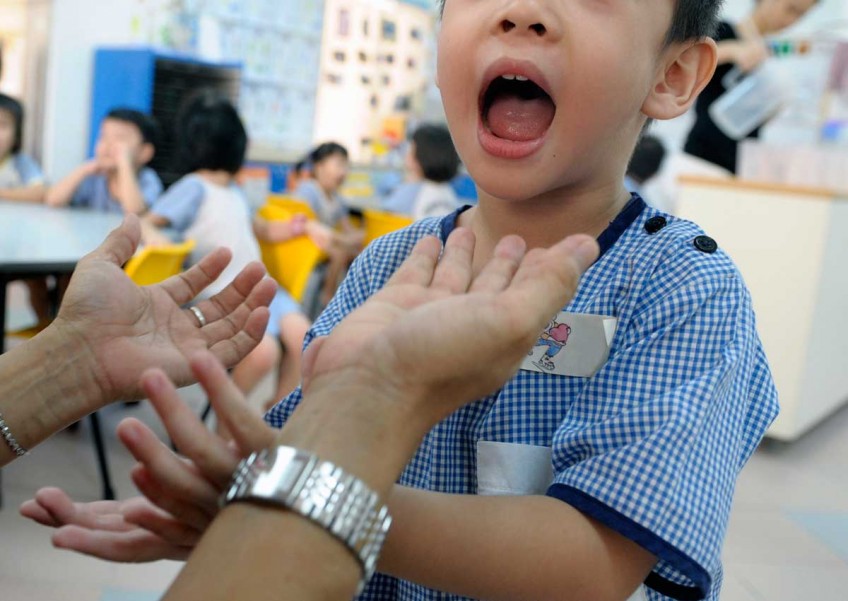 Children aged 10 and under are especially susceptible to hand, foot and mouth disease.
The Straits Times

Despite the doctor ordering home rest for her ill 21/2-year-old daughter, Ms Elizabeth Soh took the little girl on a grocery run - to relieve cabin fever.

Sophie Rose, who was suffering from a bout of mild pneumonia and bronchitis a few weeks ago, was "totally frustrated and sick of being stuck at home".

Besides, it was an outing of only about 30 minutes and she knew there were not many shoppers at the time they were there.

Three days later, after her paediatrician said her daughter was almost well, but should continue to rest at home, she took her to watch Finding Dory.

"It's hard to keep a sick child occupied at home," says Ms Soh, 28, a stay-at-home mother.

Other parents say they, too, relent on doctor's instructions for home rest once they believe their children are on the mend.

Ms J. Teo, 32, who has two children aged three and one, says she took her older child to an indoor playground during the June holidays when he was recovering from flu.

"His nose was still dripping slightly, but he did not have a fever and was not coughing much. I took it that he was more or less well," says the accounts assistant.

Some parents are unaware that some of the diseases their children have are contagious, says Dr Low Kah Tzay, a paediatrician at Mount Elizabeth Hospital.

Preschool managers also say they encounter parents who believe that as long as their child is "just a little sick", he is fine to go to the centre.

Ms Marjorie Zaccheus, principal of Presbyterian Community Services Tampines Childcare Centre, which has been hit by a spate of hand, foot and mouth disease (HFMD) cases, says she faces a different kind of problem.

When she asks parents to take home their child who is suspected of having HFMD, some of them say they would do so, but turn up only at closing time. Others do not answer their calls.

To date, 22,687 cases of HFMD have been reported this year, significantly more than the 15,356 for the same period last year. The number of cases to date is more than 10,000 cases above the median over the past five years.

It has been reported that the current epidemic has been fuelled in part by parents who send their sick children to childcare centres and refuse to take them home when asked to do so.

Whether it is HFMD or some other illness, Mrs Kimberly Quek, centre manager at Genius Hive Preschool, says she has encountered parents who continue to send their sick children to school.

"They do so because they worry about their work performance, have important meetings or conference calls to attend or have no alternative caregivers," she says.

Depending on the industries the parents work in, they may not be able to get approval for their leave applications, he adds.

The preschools try to deal with such parents and their circumstances by putting the sick children in quarantine rooms.

However, due to limited space and resources, these rooms are often just an area of the centre's office that is sectioned off.

As a result, the adults who work in the office are highly susceptible and sometimes end up contracting the illnesses from the children.

This is why doctors stress the importance of parents keeping their sick children well rested at home, so that their immune system can fight off the virus.

However, preschools say employers have a part to play too.

Mrs Quek says: "Supportive and understanding bosses will help make things less stressful for working parents, who need to leave the office to pick up their sick children as soon as possible.

"We want to see parents as responsible people, who do not want to leave their sick child in school to infect others."

In general, when he is sick with a flu, cold or cough, they keep him away from others too.

"As a parent, I hope that the bug stops at my kid and hope that other parents are doing the same. That's socially responsible behaviour," she says.

The symptoms include fever, painful mouth ulcers and rash on the hands, feet, buttocks and groin. Patients are most contagious in the first week of the illness. HFMD is transmitted through contact with an infected person's nose and throat secretions (such as phlegm and mucus), blister fluid or faeces.

The patient is considered well when there is no more fever, the blisters are no longer wet or contain fluid within them and when all mouth ulcers have subsided.

The symptoms include fever, lethargy, a runny nose, cough, watery eyes and rashes. A patient can be infectious even before the onset of symptoms. Patients must stay at home until the rashes and fever have subsided.

The symptoms include fever, body ache and red spots on the face and body, which later become blisters. The blisters take about a week to dry up and most patients recover after two weeks.

Chickenpox spreads by air or direct contact. An infected person is contagious one to two days before the rashes appear. The patient should stay at home until all the scabs dry up and there is no more fever.

The symptoms include fever, cough and breathlessness. Patients should stay at home until they do not have fever and other symptoms of the illness.