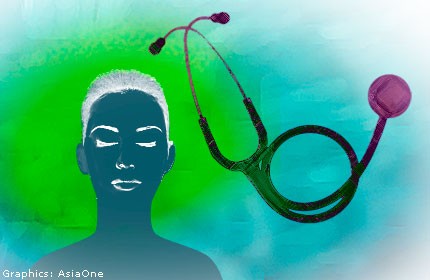 STOCKHOLM - The disco beat of 'Stayin' Alive' pulses through the room as Lennart Zetterqvist heaves dumbbells out to his side, zipping through the paces of a workout class with a twist: it's for seniors aged 90 and up.

Zetterqvist, the baby of the group at 90, is part of a growing group of pensioners in Sweden who are determined to stay in shape and remain active as they age.

"In the past people wanted to take life easy when they retired. Now they want to be active and keep fit until they're 100," says Kristoffer Sjoeberg, a personal trainer who leads the group of old-timers through their weekly class at the Sickla Haelsocenter health club on the outskirts of Stockholm.

Anne-Marie Novotny, a spry and vivacious 91-year-old in a pink tee-shirt, overdoes it a touch on the abdominal exercises.

"I just had a liver operation so I'm going to take it easy for the next few minutes," she says, adding that until last spring she hadn't exercised since she finished school in 1938.

She was one of 16 pensioners over the age of 90 who accepted the local municipality's offer of a free weekly gym class.

The idea is that keeping older people fit means they can continue to live independent lives - and stay out of hospitals and elderly care homes, which in Sweden's cradle-to-grave welfare state are funded by municipalities.

"We focus a lot on strength and balance, and we've seen a big improvement since we started this class in March. Back then most of the people came with canes or walkers, now almost none of them do," Sjoeberg says.

"I sometimes forget to take my cane with me nowadays!" exclaims Alice Wettergren, 92.

While this group is exceptional - it's the only one for the 90-plus crowd in Sweden - it illustrates a growing trend as Sweden, like the rest of Europe, grapples with an ageing population.

According to the Seniorbarometern study published in September, there are 1.8 million pensioners out of Sweden's population of nine million, and the group is expected to grow by another 850,000 by 2015. UN projections forecast that seniors will account for 25 per cent of the population by 2050.

"These are no couch potatoes, they're much more active than the average Swede," the head of the study, Linus Blom, told AFP.

Among those aged 59 and up, 38 per cent say they do some form of exercise every day. One in six say they are considering buying a membership at a gym.

And since 2000, the number of people over the age of 65 who have completed the Stockholm Marathon has increased four-fold.

"This is just a mirror of today's society: older people are living healthier, longer lives and they want to stay active much longer," Stockholm Marathon organiser Thomas Enstroem told AFP.

As far as runners go, few can beat Herbert Liedtke.

It took three strokes in the past year to get the now 95-year-old to give up sprinting in international masters competitions.

After driving a taxi for 40 years and never exercising, Liedtke took up running at the age of 69 on a whim when he tagged along with colleagues 15 years his junior to their regular track workout.

"I had never run a day and I outran all of them," he recalls with a proud grin, standing ramrod straight in sweat pants and runners in the kitchen of his retirement home where his cluster of medals hangs in the doorway.

At 85, in 2001, he set a new world record for 400-metres in his age category in Australia. (And as at every other competition, he insisted on doing a headstand on the winners' podium.)

Blom noted that those now entering retirement are the post-war "baby boomers", many of whom have stronger finances than previous retirees and who are expected to make up a key market for gyms and health clubs. Bodil Hedenstroem is a case in point.

At 71, she attends workout classes three to four times a week at the upscale Sturebadet health club in central Stockholm.

"I need this! I can't go without it," says the tall, slender blonde, adding she and her husband often take cycling or hiking holidays.

"I feel more limber, my balance is better and I notice my stamina is better," she explains.

Goeran Murvall, the doctor who came up with the idea for the 90+ workout group, says keeping seniors thinking positively is as important as the exercise.

He wanted to get them "dreaming about next year's hiking trip, or holiday in the Alps, or 'how I'm going to climb down into the sailboat one more summer'."

"The elderly need to believe in the future and set new goals," he says, adding: "Physical activity, especially for seniors, is the best and cheapest medicine there is."

Personal trainer Sjoeberg cautions that today's younger generations are going to need to think about exercising even more than today's senior citizens.

"This generation of seniors was much more active for many years," he says.

They walked and cycled more every day, and as pastimes on weekends picked mushrooms or berries in the woods or skied in the forests.

"Now, the younger generations sit still so much in front of the computer and television and they drive everywhere. So they need to exercise so that they can live to be 90 and have a good life when they are 90," he says.