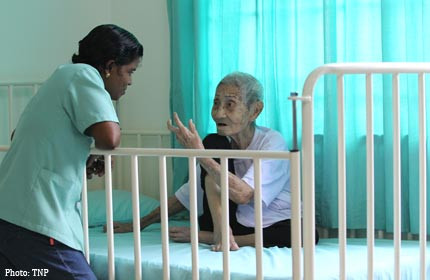 SINGAPORE - The demand for foreign manpower is expected to go up in the construction and health-care sectors. Singapore will also need more maids by 2030.

The National Population and Talent Division (NPTD) has released estimates of how many more foreign workers will be required in these sectors in that year.

In an occasional paper released on Monday, the NPTD projected that the ageing population will mean a demand for 91,000 health-care workers in 2030, of whom about 28,000 will be foreigners.

This is almost double the 50,000 health-care workers in Singapore last year, of whom 13,000 were foreigners.

The larger number of elderly people, along with more double-income households, will also push up the demand for foreign domestic workers from the 198,000 employed last year to 300,000 by 2030.

There were 250,000 construction workers here last year, and this number may also go up, but not as much as the others.

While the Government is expected to need more workers for expanding the rail network and building more flats and health-care facilities, improving productivity should reduce the number needed.

Taking this into account, the NPTD expects demand for construction workers on low-skilled Work Permits to be between 250,000 and 300,000 by 2030.

The paper noted that these projections are not targets. Instead, they show changes in demand for workers in these sectors, based on certain assumptions about demographic and demand trends.