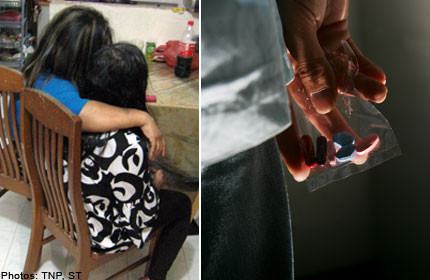 SINGAPORE - He was a loving father and caring husband - when he was not abusing drugs.

Madam Maria (not her real name) told The New Paper on Wednesday that whenever her husband was sober, he would play with her children and organise family outings.

But there were days when the 45-year-old locked himself in a room to take drugs.

Her husband would then emerge sullen and irritable.

Madam Maria, 36, said her husband was arrested for drug-related offences in 2010 and sentenced to five years' jail.

The mother of six is now left on her own to support her children.

She is an example of what Law Minister K. Shanmugam called in Parliament on Wednesday "the real victims" of drugs.

This issue surfaced as Parliament passed a law to remove the death penalty in certain instances of drug trafficking.

Three MPs urged the Government on Monday to go further and abolish the mandatory death penalty for ethical reasons.

Mr Shanmugam replied that he recognised that mercy and compassion need to be shown, but stressed that they must also be shown to the family members of drug offenders, who are the real victims.

Madam Maria, who has two sons from a previous marriage, said she knew her current husband was a drug addict when she married him in 1997.

He had been jailed several times for drug offences previously.

Thought he would change

She thought he would change after their marriage and for the first four years, things looked okay. The family stayed in a four-room flat in Jurong. Between them, they were earning a decent salary of about $6,000.

Then came his 2001 arrest for heroin abuse which shocked Madam Maria.

Her husband, who worked in shipping, was jailed for a year, but somehow the family managed to pull through this period.

Said Madam Maria: "When he was released, he swore that he would never abuse drugs again."

Things were fine again for the next eight years. Her husband got his old job back, earning the same monthly salary of $5.000.

Then in 2010, Madam Maria's world crumbled as her husband started abusing drugs again. To this day, she does not understand why he turned his back on a decent life.

She said sadly: "My husband used to spend up to three days at a time locked in a common bedroom of our Jurong flat to abuse drugs.

"I did not have the heart to call the police as I always wanted to give him a chance. He is a good man and he threw his life away by abusing drugs."

Sometime towards the end of 2010, he was arrested for abusing "Ice" or methamphetamines.

He was then sentenced to five years' jail and ordered to receive three strokes of the cane.

This left her and her six sons, aged between four and 19, to fend for themselves.

They are now living in a one-room rented flat in the Kallang area.

Madam Maria takes home about $1,000 a month as a cook and she shares the unit with her 64-year-old mother, a cleaner.

Together, the two women earn about $1,900 monthly.

Madam Maria admits that she still loves her husband dearly.

She said: "I know he is not a bad person. And I'm just counting the days to his release.

"But I don't think I'll be able to take it any more if he goes to jail again. "If this happens, I'll have to ask for a divorce."

For now, Madam Maria said both she and her mother are making just enough to survive. She also gets financial help from a few agencies.

One of them is the Harun Ghani Education Fund, which helps the children of drug offenders stay in school.

Its honorary secretary, Ms Siti Haslinda Putri Harun, confirmed that the organisation gave $470 last December to three of Madam Maria's children for items such as school books and study aids. Despite the financial help she has received, Madam Maria said it is very difficult to make ends meet.

"We are now watching every penny carefully. I've got to remain strong for the sake of my children.

"I'm patiently waiting for my husband to be released and I pray that that this time, he will leave a life of drugs for good," she said.