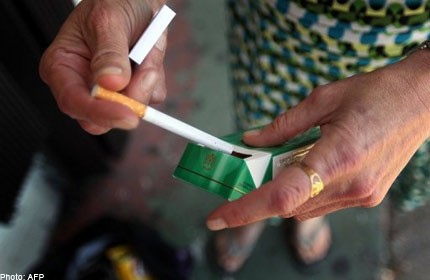 The retiree, who does not light up at home because his three young grandchildren are there, heads down to the void deck of his HDB block whenever he needs a puff.

He will be affected when new restrictions on smoking come into play next year.

In Parliament last week, it was announced that the smoking ban - which already applies to a long list of public places including community centres, exercise areas and hawker food centres - will soon reach common corridors, void decks, sheltered walkways and overhead bridges.

Like many others in the online world, he is howling at the thought that he's further restricted.

"I respect that we don't smoke in front of other people, but seriously? In a well-ventilated, empty void deck or corridor? Eh, we pay taxes too right? What about our rights?" he grumbles.

"What next? Don't smoke in my own porch or verandah because my neighbour will complain?"

He remembers with clarity how the ban has widened over the years.

It started with restaurants and air-conditioned places, and moved to amusement centres, pools, underground walkways, lift lobbies and within within 5m from entrances and exits to buildings.

But perhaps it needs such a paternalistic push from the Government, say some.

Reports put the number of smokers in Singapore at about 14 per cent of the population.

"The more inconvenient it is, the more the Government discourages it, I think people will pay attention and more will get the idea that it's no longer socially acceptable to light up," sniffs Madam Tan Kim Lee, a housewife, 40, who has two young children.

Mind you, it's not only Singapore that has enacted such anti-smoking laws.

In Tokyo, you have to walk to find specific smoking spots on the streets.

Other countries like Canada and Britain ban smoking in indoor public places.

I am all for the ban. In fact, I want the ban - yes, to the likely horror of Mr Lim - to extend to inside the home if possible.

You see, each time the Neighbour in the unit directly below our flat lights up, my blood pressure goes up.

That's because even if we can't see the billowing chimney, the smell of stale cigarette smoke that wafts into our home is enough to drive me mad.

Which brings me to this point: Orwellian visions of total control of smoking aside, a person's decision to quit is very personal.

Making it inconvenient is a good start, but how else can the community, friends, family, and yes, neighbours help those who light up come to the conclusion that they want to quit?

Forcing them certainly won't work, say people I have come to know on my weekly trundles around housing estates.

Mr Willie Tan, who runs a coffee shop in Pasir Ris, says in Hokkien: "Aiyah difficult, lah. Not all smokers will listen to you and smoke in the permitted spot."

Since 2006, operators of food outlets and coffee shops can be fined up to $1,000 - as with smokers who are caught - if they don't advise patrons to stub it out.

From being glared and shouted at to being threatened and even once punched, he knows all about the perils of stopping smokers in their tracks.

Madam Zhu Meishu, 50, who works in a 24-hour coffee shop in Geylang, is resigned to leaving the the ones who light up alone.

Particularly when it's late at night.

She says: "Unless other customers complain, we won't do anything.

"Most of them just come here to eat, have a beer and relax. You stop them from smoking and they'll just walk off to another coffee shop and the business will be affected."

Hmmm. Okay, I don't have all the answers, but I know the Health Promotion Board is hosting the who's who in the field of tobacco control later this month in a convention here.

There may be more insight from the international experts.

But first, my own sneaky brilliant plan to get my neighbour to stub it out: Maybe I should get a ticket for the two-day, one-night Malacca trip organised by the community club for him.

It may be a good start for him before our own rules kick in next year.