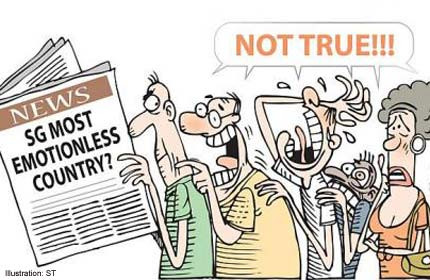 SINGAPORE - Singapore has been described as the world's most emotionless society in a survey.

According to the Gallup survey, people here are the least likely to report experiencing emotions of any kind on a daily basis.

The findings, released on Wednesday, placed Singapore ahead of countries such as Georgia, Lithuania and Russia as the most emotionless society.

The Philippines was ranked as the country with the most emotions, followed by El Salvador and Bahrain.

About 1,000 people aged 15 and older from each of the 150 countries surveyed were polled.

Participants were asked questions such as "Did you smile or laugh a lot yesterday?" and if they experienced feelings of enjoyment, physical pain, worry, stress or anger the previous day.

The questions were repeated each year between 2009 and last year. Nearly four in 10 surveyed in Singapore said they did not experience any positive or negative emotions the day before.

But some Singaporeans and experts The Straits Times spoke to dispute the findings.

Most said that while Singaporeans are not outwardly excitable people in public, there are many occasions when they express either their frustration or joy.

"I believe we're simply not as expressive with our emotions," said Mr Danny Tan, 29, a public relations consultant.

"There are occasions to the contrary though. Try cutting someone off while driving on the expressway," he added.

"Steal someone's seat on the MRT and see what happens. You got no chance!" said the Singapore-based Briton who has chronicled Singapore life in books.

The country may still be conservative but it is not the same as being emotionless, he added.

It is a point psychiatrist Adrian Wang echoes.

"We're less inclined to make a big show of how we feel. It may be because we're a bit more conservative and tend to keep things to ourselves," he said.

"But when we're warmed up, we can be quite expressive - take a look at our National Day celebrations."

Likewise, sociologist Paulin Straughan thinks the survey findings should be taken with a pinch of salt.

Look online, she said, referring to the current debate on whether the Primary School Leaving Examination should be abolished.

"I think we are certainly a reactive nation, and we have strong opinions one way or another."

However, she acknowledged that there is perhaps still a silent group who are not quite confident about speaking up and expressing how they feel.

But to move the country forward, she said, Singaporeans should speak up not only when they want to complain, but also when they are satisfied.

Still, there are some who think there is some truth in the survey findings.

"I think it's part of the way we are brought up," said Mr Timothy Lai, 22, a National University of Singapore student.

"We are always told to be 'future-oriented' instead of living and feeling the present, and that how you do or feel now does not matter."

Hong Kong-based writer Andrew Wood, who lived for six years in Singapore, said his "Singaporean friends seem to be able to laugh and cry as well as anyone else in the world".

"But that's on a personal level. In public, Singaporeans do seem more guarded than in other countries... That said, if you want to see Singaporeans at their most passionate, get them talking about their favourite food."