Teens may buy less tobacco when displays are hidden: Study 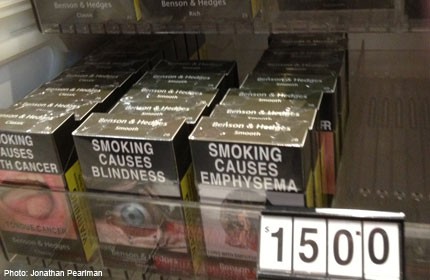 Teens may buy less tobacco when displays are hidden: Study

UNITED STATES - Teens may be less likely to buy cigarettes at convenience stores if they aren't sold in plain sight behind the counter, according to a US study conducted using a virtual reality game.

"We know the retail environment is a very important place for tobacco companies to advertise and market their products,"said lead author Annice Kim, from the independent research institute RTI International in Research Triangle Park, North Carolina.

"They're prominently displayed at the point of sale, and it exposes all customers, including kids."

Kim's team wanted to test the effects of covering up such cigarette displays on teen shopping and opinion, but the researchers couldn't conduct a real-world experiment because as of yet, no states have banned the displays - although some states are considering it to curb teen smoking.

So they designed a virtual reality game and sent more than 1,200 youth, between age 13 and 17, into a simulated online convenience store.

Researchers asked them to select four items in the store: a snack from the aisles, a drink from the coolers and two products of their choice from the checkout counter.

In some scenarios, the cabinet behind the counter prominently displayed cigarettes, while other teens saw the cabinet closed and the display covered up. Any teens that tried to ask the cashier for cigarettes were denied because of age - but what the researchers were interested in was how many tried to ask.

Depending on other changes they made to the virtual convenience store, the researchers found that 16 to 24 per cent of teens tried to buy tobacco products when the display was open, compared to 9 to 11 per cent when it was closed.

In a post-virtual shopping survey, whether cigarettes were openly displayed wasn't clearly tied to teens' perceptions of how easy it would be to buy tobacco products if a similar store actually existed in their neighborhood, the researchers reported in Pediatrics.

However, 32 per cent of youth said they were aware cigarettes were available for sale when the display case was closed in their virtual store, compared to 85 per cent of those who had the open version.

"Policies that require retailers to store tobacco products out of view... could have a positive public health impact," Kim told Reuters Health, adding that the study should be considered along with other evaluations of display restrictions.

But tobacco control researcher Michael Siegel, from the Boston University School of Public Health, said that while he thinks there is "strong justification" for hiding displays from youth, he's not sure how much the study adds to the debate.

"It certainly shows that tobacco displays get people to think about cigarettes, which is what they're there for," said Siegel, who did not take part in the study.

"It can't be extrapolated into real life, because in real life kids would go to a store when they want to buy cigarettes,"he added, noting that he was doubtful there were many times when youths hanging out at a convenience store just decided to have a cigarette because they were there and there was nothing to do.

Rather, banning the displays will help prevent youth from being exposed to marketing by tobacco companies and influenced in their attitude towards smoking, he said.