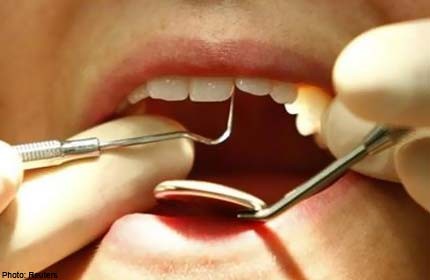 NEW YORK - For 20 years, researchers have reported a link between gum disease and heart attacks or stroke, but a new analysis finds that claim seriously flawed - so much so that the American Heart Association (AHA) issued a rare "scientific statement" on Wednesday concluding that gum disease has not been shown to raise the risk of, let alone cause, cardiovascular illness.

Moreover, the statement continued, treating gum disease either professionally or by regular brushing and flossing has not been proven to reduce the risk of heart disease or stroke.

The statement, published in the AHA journal Circulation, reflects a three-year analysis of about 600 studies by an expert committee, led by a dentist and a cardiologist. It was endorsed by The American Dental Association Council on Scientific Affairs.

"There is a lot of confusion and misinformation, with many in dentistry and cardiology developing a strong opinion that there was a connection," said Peter Lockhart, professor and chair of oral medicine at the Carolinas Medical Center in Charlotte, N.C., who co-chaired the expert panel. "That's a distortion of the facts. The scientific evidence points in the other direction."

Countless health websites and books, not to mention the popular press, nevertheless declare that periodontal disease is a risk factor for heart disease and stroke. Indeed, hundreds of studies have pointed in that direction.

Most of those studies are problematic, however, because they were observational. That is, they found that people with heart disease, or those who had suffered a heart attack or stroke, were more likely than heart-healthy people to have gum disease.

But that association does not necessarily reflect a causal link, explains cardiologist Ann Bolger of the University of California, San Francisco. Instead, several factors can independently raise the risk of both kind of illness; they include age, smoking, obesity, diabetes, low socioeconomic status and being male.

Another problem, which besets many areas of medicine, said Lockhart, is that "negative studies aren't published." That is, research that fails to find an association between gum disease and cardiovascular problems is less likely to be submitted to or accepted by a journal.

Besides correcting the scientific record, the AHA panel hopes that publicizing its conclusion will help people. Most important, said Bolger, if people understand that periodontal disease does not raise their risk of heart attack and stroke they can focus on what does, such as smoking, obesity, high blood pressure, and stress.

The gum-heart link seemed more credible than many associations identified by observational studies, largely because there was a plausible mechanism. Gum disease is marked by bacterial infection, and mouth bacteria enter the blood stream more easily where the gums are diseased.

Bacterial infections can increase inflammation, and the link between atherosclerosis and inflammation "is well established," wrote the AHA panel, "with consistent associations" between blood levels of inflammation and increases in heart attacks and strokes caused by blood clots.

"But just because something seems to make sense doesn't mean it's true," said Bolger. "You need to prove it."

Studies trying to do that have produced contradictory results. Some have found oral bacteria in the plaques that make up atherosclerosis, as well as in heart valves. Others have not. Some have found more oral bacteria in the arteries of people with healthy gums than in those with severe gum disease. That, said the AHA report, "argues against a causal role of direct periodontal pathogen invasion."

Anyone diving into medical journals could easily come away thinking otherwise. A 2009 study from Harvard School of Public Health concluded that "oral disease was associated with excess cardiovascular disease risk, independent of genetic factors." A 2008 study by scientists at Columbia University Medical Center noted that "periodontal disease has been associated with cardiovascular disease," with inflammation being the most likely link.

Unfortunately, the AHA panel concluded after scrutinizing hundreds of such studies that "a lot of the claims break down because the studies were not designed well," said Lockhart. "They were too small or were flawed in some other way." And a close read shows that the studies found only "associations," not a cause-and-effect connection between gum disease and heart disease.

Not everyone jumped on the gum disease-heart disease bandwagon. Online calculators offered by the American Heart Association and the National Heart, Lung and Blood Institute do not include gum disease as a risk factor. In 2009, the US Preventive Services Task Force concluded that "the current evidence is insufficient" to say that periodontal disease raises the risk of coronary heart disease.

On its website, the American Academy of Periodontology (AAP) says, "Researchers have found that people with gum disease are almost twice as likely to suffer from coronary artery disease." It does not make an explicit causal claim, but notes that "oral bacteria can affect the heart when they enter the blood stream, attaching to fatty plaques in the coronary arteries," which "may lead to heart attacks."

AAP President Pamela McClain, a periodontist in Aurora, Colorado, agreed that research has "not been able to say that periodontal disease causes cardiovascular disease." Gum disease "is a risk factor, and observational studies have supported an association but not a causal one." She said she did not see a need to revise the group's website.