A dog getting an anti-rabies jab at a vaccination campaign at the Kota Sentosa Basketball Stadium.

KUCHING - The wet market at Sungai Maong here and Kampung Serikin in Bau are the latest areas in Sarawak to be declared as rabies-infected.

This brings the total of affected areas to 22, the State Disaster Management Committee said in a statement yesterday.

It also said the Sarawak-Kali­mantan special committee to prevent and control rabies, which was set up last week, would create an immune belt along the border by carrying out joint vaccination.

The special committee met at the Tebedu district office yesterday.

Both sides will step up awareness campaigns on rabies in border areas by distributing pamphlets in Bahasa Malaysia and Bahasa Indonesian­esia. 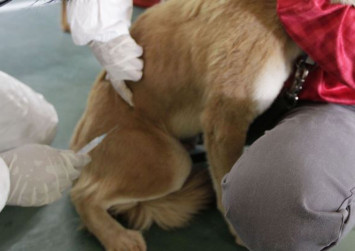 In addition, a standard operating procedure between Sarawak and west Kalimantan will be drawn up for joint anti-rabies operations in border areas.

Both sides also agreed not to allow the import and export of animals.