US man dies after cockroach-eating contest 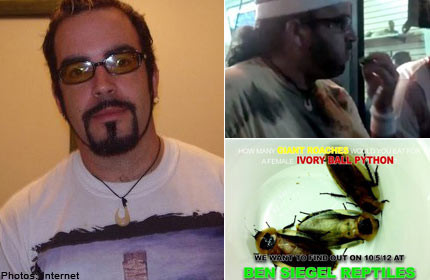 US man dies after cockroach-eating contest

MIAMI - A US man died after winning a cockroach and worm eating contest at a Florida reptile house over the weekend, police said.

Edward Archbold, 32, had eaten several dozen roaches and worms Friday as part of the contest to win an exotic python.

He later began vomiting and was picked up by an ambulance in front of the shop, the Broward County Sheriff's Office said in a statement.

Archbold was later pronounced dead at a hospital, and the medical examiner's office will be performing an autopsy to determine the cause of death.

The contest was held by Ben Siegel Reptiles, which offered different prize pythons for whomever could eat the most of different categories of bugs.

"How many giant roaches would you eat for a female ivory-ball python?" the reptile store said on a Facebook page advertising the contest.

"Here's how it works: Eat the most bugs in 4 minutes, win the ball morph. That's it. Oh yeah, any vomiting is an automatic DQ."

The reptile shop later published a message expressing sadness about Archbold's death, saying: "We just met him the night of our sale but all liked him very much. He was outgoing and was fun and got the crowd very worked up and excited. We are sorry we will not get to know him better."

The shop also posted a statement from an attorney.

Archbold, who went by Edward William Barry on Facebook, said he had taken part in a super worm eating contest earlier in the evening.

"So I guess I'm in a cockroach eating contest tonight... wish me luck :)," he posted on October 5, hours before his death.

Friends later posted messages of condolence on his page, with one writing: "never thought id hear the day...i truely believed u were untouchable as i am sure many others did too!!"