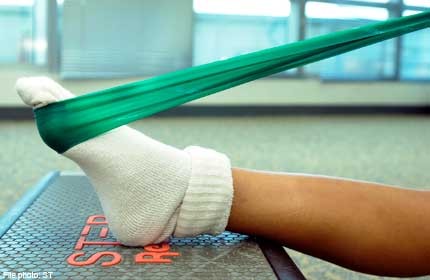 NEW YORK - Going through a set of warm-up exercises before practices and games cuts the rate of knee and ankle injuries in teenage girls playing soccer and basketball, a US study said.

Training coaches in these exercises prevents non-contact injuries such as anterior cruciate ligament (ACL) sprains that may turn girls off physical activity and require expensive surgery, according to findings published in the Archives of Pediatrics & Adolescent Medicine.

Exercise in teenage girls has been linked to better grades, less obesity and lower pregnancy rates.

"We see that girls that are active in sports are less likely to get involved in some of these other high-risk behaviors, so keeping them active and making sure an injury doesn't take them out is important," said Cynthia LaBella at the Northwestern Feinberg School of Medicine, who worked on the study.

"Warm-ups are worth the time and the money invested for the long-term health of the girls."

During puberty, both girls and boys shoot up in height, but girls' muscles don't develop as much as boys' do, said Tim Hewett, head of sports medicine research at the Ohio State University and Cincinnati Children's Hospital.

Because of that imbalance, studies have shown girls get between two and 10 times more injuries such as ACL sprains than boys do.

The study focused on about 1,500 girls, mostly low-income girls playing on high school soccer and basketball teams in Chicago public schools. Half were on teams that did the warm-up program and half were not.

Ninety coaches were randomly assigned to lead a 20-minute warm-up program that involved strengthening, balance and agility exercises before every game and practice, or to stick with their usual warm-up routine. The warm-up included exercises focusing on jumping and landing safely.

Specifically, there was a 35 percent reduction in leg overuse injuries with the warm-up program, and a 44 percent lower rate of acute non-contact injuries.

LaBella noted that some coaches might not want to use the warm-up program because it took time out of already limited practices, but Hewett said the exercises, when done correctly, can also improve jumping height and power.

"You can make a huge difference in the athleticism of these girls. There's many ways we can show these kids that they're faster, quicker, more balanced athletes," he added.