Watch out for grease in 'healthy' vegetarian bee hoon 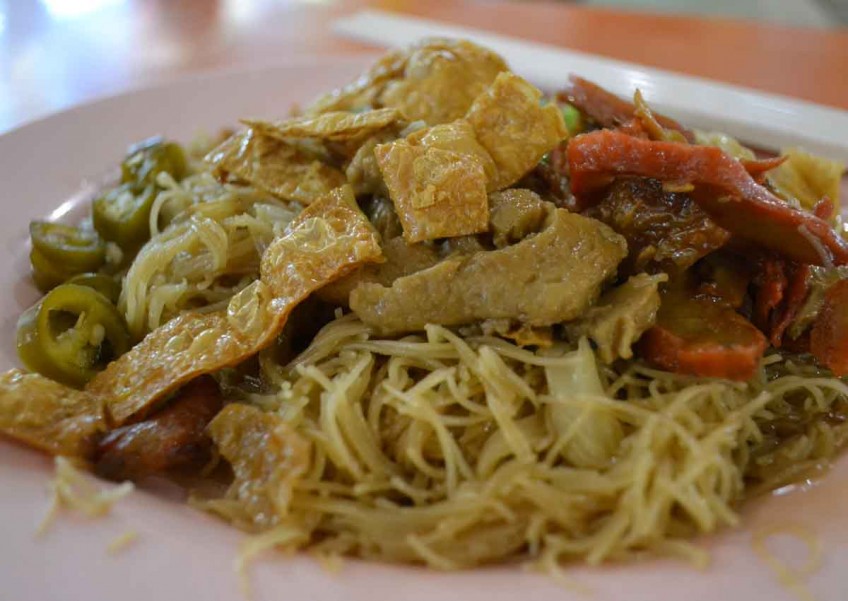 Some dishes, such as vegetarian noodles, may be perceived as being healthy food when, in reality, they are not.

They may be drenched in oil or a calorie-laden sauce.

This may be an issue in Singapore, where rice and noodles are sources of commonly eaten carbohydates. And replacing rice with noodles does not really make a big difference for someone who is trying to lose weight or become healthier.

It is advisable to reduce the intake of refined carbohydrates such as white rice and noodles as diets that are high in refined carbohydrate foods have been linked to an increased risk of type 2 diabetes, said a spokesman for the Health Promotion Board.

Instead, one should increase the consumption of wholegrains, such as brown rice and noodles which contain brown rice flour, he said.

Wholegrains are more nutritious than refined grains as they contain more vitamins and minerals.

What is also very important is the type and amount of ingredients you add to your carbohydates to form the final dish, said Ms Jaclyn Reutens, dietitian from Aptima Nutrition & Sports Consultants.

Plain bee hoon, made with rice flour and water, is low in fat. Egg noodles, made with egg, wheat flour and oil, have a higher fat content.

But when you fry plain bee hoon with ingredients like fatty cuts of meat and drown it in oil, it becomes an unhealthy dish, said Ms Reutens.

One should consider the whole dish when making food choices. "Hidden calories such as the oils which the food is cooked in could be masked by the flavours in the dish," said the Health Promotion Board spokesman.

For instance, a dish of hor fun usually comes with a starchy sauce, which adds to the calories, he said. There are some noodles like mee sua, which appear to be light dishes as they are often served in a soup.

Mee sua is higher in calories than mee pok, if you compare it gram for gram. However, the quantity of noodles used and the preparation method of a dish would greatly affect the calorie count of the meal.

Some refined carbohydrates like yellow noodles or white rice have a high glycemic index (GI) score.

However, eating a bowl of rice or noodles with more vegetables and protein can lower the GI of the meal, said Ms Goh.

1 VEGETARIAN OR FRIED BEE HOON: Although vegetables are low in calories and an important part of a healthy diet, the fried vegetarian bee hoon dish that you usually find in the kopitiam isn't necessarily a healthy choice.

This dish is normally greasy in appearance and is usually accompanied by deep-fried and starchy mock meat items such as mock luncheon meat and greasy vegetables.

To enjoy it without guilt: Pick the least greasy accompaniments and ask for less bee hoon. Go easy on the chilli as it usually has a layer of oil on top.

2 SATAY BEE HOON WITH KANG KONG: Plain bee hoon and kangkong are both healthy until you douse it with a fat-laden peanut gravy. This dish contains 727kcal and almost 40g fat.

To enjoy it without guilt: Ask for the sauce to be served separately and drizzle just a small amount over the bee hoon.

3 DEEP-FRIED FISH SOUP WITH NOODLES: Yes, fish is healthy but the calorie count doubles when it is deep-fried. One bowl provides 641kcal and almost 20g fat.

To enjoy it without guilt: Ask for sliced fish instead of fried fish.

4 EE-MEE WITH GRAVY: The noodles are deep-fried and the serving size is usually large. It is definitely a carb- and fat-heavy dish.

To enjoy it without guilt: Ask for half the noodles.