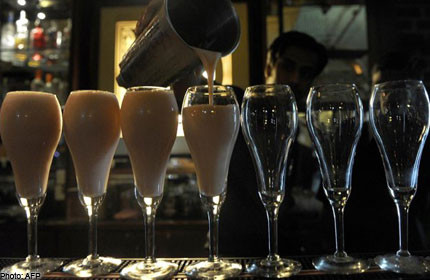 Women alcoholics suffer damage to the part of their brain that controls moods, impulses and sleep three times faster than their male counterparts, a Swedish study showed Wednesday.

Women suffer a 50-per cent reduction in the so-called serotonin function in their brain after four years of excessive drinking, while men show the same amount of damage after 12 years of alcohol abuse, according to the study by researchers at Gothenburg University.

"The impairment is progressing much faster in women," explained Kristina Berglund, who conducted the study with colleagues from the university's Department of Psychology, as well as two researchers at the faculty of Health Sciences, known as the Sahlgrenska Academy.

Serotonin is a brain neurotransmitter that is, among other things, critical to the development and treatment of depression and chronic anxiety.

It also regulates impulse control and our ability to fall asleep and stay awake.

The researchers studied several brain functions of 42 people -- a third of them women -- who admitted to alcohol dependency, along with 28 control subjects.

However, "we could see the damage to the serotonin function was equal between men and women," Berglund said.

The results, which are scheduled to be published in the journal of Alcoholism: Clinical and Experimental Research in January, had come as a partial surprise to the researchers, she said.

"We were not surprised to find that the serotonin function was impaired in the alcohol-dependent individuals, but we were surprised to see that women were so much more vulnerable, even in the brain," she said.

Ulf Berggren, one of the Sahlgrenska Academy contributors to the study, meanwhile stressed that while the timing was different, men ultimately suffered the same degree of harm to their serotonin function as women.

The study authors acknowledged more research was needed, especially since they had used such a small number of test subjects.

Berglund also said that while the researchers had connected significant serotonin function harm to alcohol abuse, they still needed to look at the psychological impact of the damage.

"We know this function is significantly impaired, but what does this mean? What are the consequences? That's a question that needs answering," she said.