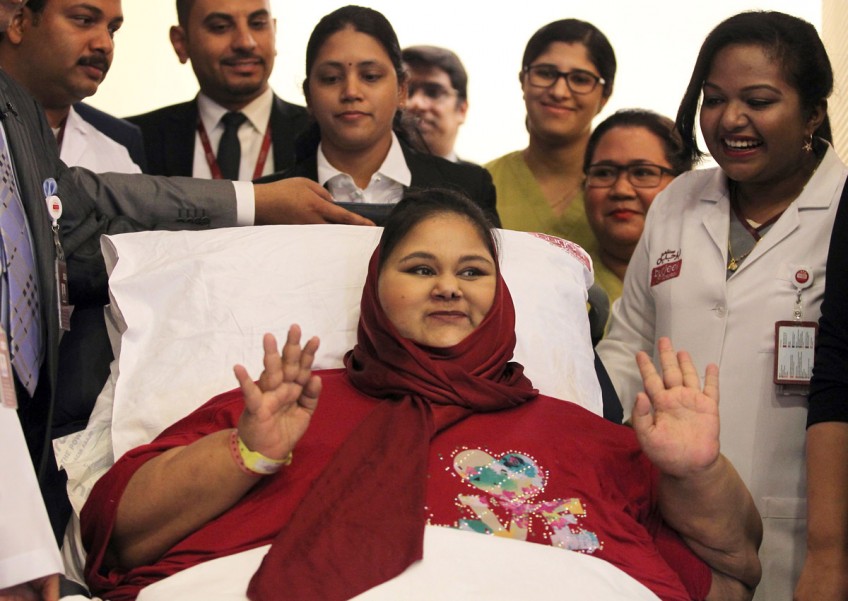 ABU DHABI - An Egyptian believed to be the world's heaviest woman died on Monday (Sept 25) of heart and kidney failure at an Abu Dhabi hospital, following months of treatment to help her lose weight and one day walk again.

A team of more than 20 doctors had been caring for the bedridden Eman Ahmed Abd El Aty, 37, since her arrival at Burjeel Hospital in May.

El Aty first sought treatment in India, travelling from the port city of Alexandria to Mumbai aboard a specially modified Airbus in early February.

She had a long wait as no airlines were willing to fly her due to her health complications.

She had not left home in more than two decades and weighed around 500kg.

Her request for an Indian visa was initially denied, but she was granted passage after the doctor who volunteered to do her initial surgery tweeted a plea for help directly to India's foreign minister, who intervened.

Her family told the doctor that as a child she was diagnosed with elephantiasis, a condition that causes the limbs and other body parts to swell, leaving her almost immobile.

By the time she left Mumbai, doctors said El Aty had lost more than half her original weight.

El Aty left Mumbai when her sister clashed with the hospital, disputing her progress and treatment.

In Abu Dhabi's Burjeel Hospital, doctors were hoping to help El Aty walk again, according to a report in the Indian Express.

El Aty celebrated her birthday last month with her family and doctors by her side.

The Alexandria native had dreamed to one day visit the beach again, the Indian Express said, quoting her sister.