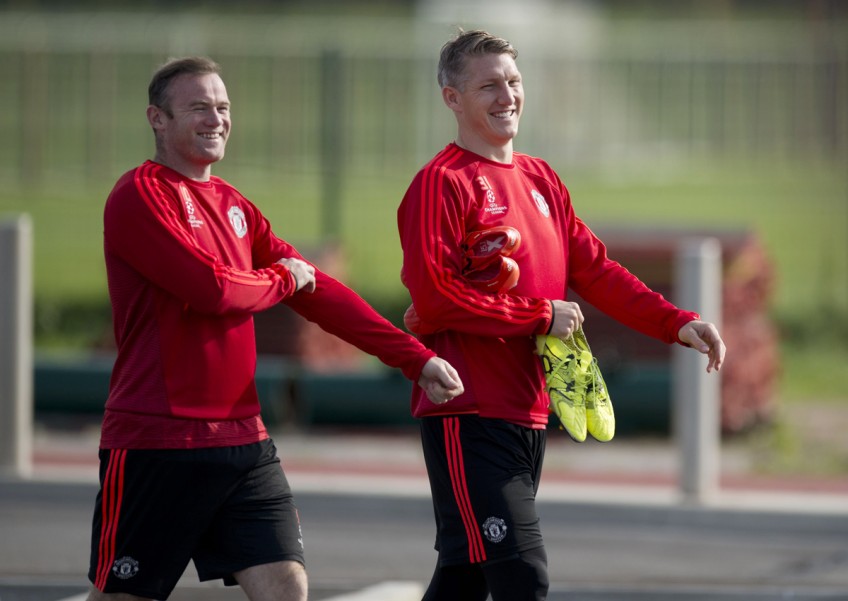 While the Englishman Wayne Rooney (left) is the top scorer in Manchester derbies, German World Cup winner Bastian Schweinsteiger is relishing making his debut in the white-hot atmosphere of one.
AFP

President Xi Jinping is a Red, of course. But on his visit to Manchester on Friday, he was taken on a tour of the S$430 million blue training complex financed by the emirate of Abu Dhabi.

It is hard to think of any more graphic image of sport and global politics more than this.

Sergio Aguero, not one to miss an opportunity, persuaded China's leader and Britain's Prime Minister David Cameron to pose with him for a selfie that went viral within seconds.

There are those who claim that China invented football a thousand or so years before England and Scotland started it in 1872.

But what we can be sure of is that the Manchester derby has been going for 134 years - and had Mr Xi been able to extend his UK visit he might have been the guest of honour at Old Trafford today.

As it is, the game will go on without him even though, if his subscription is up to date, he can join hundreds of millions of TV viewers around the world.

You will know (even if he doesn't) that history really matters in the Mancunian derby. It divides the city, divides families and friends.

And unless you exist in a derby-free bunker, everyone in the community is aware that United have won 70 derbies, City 49, with 50 tied.

The maths has changed since September 2008. That was when Sheikh Mansour bought City, and began pouring in Abu Dhabi sovereign wealth fund money that has changed both the landscape and the omnipotence of the Red Devils.

Not stopping at the blue takeover in England's northern capital, the Sheikh has invested in New York City FC, Melbourne City FC and Yokohama F-Marinos - and in partnerships in Denmark, Ghana, Ireland, South Africa and Spain.

The aim is higher than the Premier League, and City's coach Manuel Pellegrini is under no illusions that he must shape up City as a Champions League contender, or make way after this season for either Pep Guardiola or some other coach chosen by Abu Dhabi.

The effect upon Manchester is already profound.

In "Fergie Time", United not only bossed the city and the country, but became the force in Europe that the City owner is now trying to buy.

But even Alex Ferguson felt the might of City's spending when, in this derby four seasons ago, United were humiliated 6-1 in their own stadium.

That started a three-win roll by the blue half of Manchester over the red at Old Trafford until, last April, United came from behind to win 4-2.

There have, in fact, been 41 goals in the last 10 contests between the two clubs in all competitions, and one imagines that Louis van Gaal, the big spender who is trying to stem the tide of City's challenge, is grateful that neither Sergio Aguero nor the playmaker David Silva are fit for duty this afternoon.

Wayne Rooney, the record goal-scorer with 11 goals in the derby, is available for selection even though some critics harp about a slowing down of his capability.

I write that tongue in cheek because, even with his heavy frame and the hundreds of games he has put his body through in a career already 14 years into the Premier League era, he can - with a controlled diet and modern training - go on for a few years yet.

Of late, Rooney hasn't been the sharpest striker for United, the new arrival, Anthony Martial has.

However, the teenager apart, there is a perceived lack of pace in the United side, couple with a slow and deliberate regimen in the van Gaal style of dominating matches.

As of this morning, United are a mere two points behind City. But the Sky Blues have greater speed, greater options, and to Pellegrini's credit, a greater commitment to fast-flowing, attacking movement.

The Chilean is a pressured manager, yet he refuses to sacrifice his principles.

He says football is about entertainment as well as winning, and when he lost Aguero and Silva recently, he improvised with Wilfried Bony ad Raheem Sterling up front, and with Kevin de Bruyne so adaptable either as a winger, a playmaker or a game-winning striker.

De Bruyne, cruelly discarded by Jose Mourinho when he was at Chelsea, has carried the form he established with Wolfsburg in the Bundesliga into the Premier League with barely a pause to acclimatise to the faster and more attritional speed of play in England.

He hasn't, yet, tasted the charged atmosphere and the heightened aggression in the derby.

Some critics believe that, with players from more than a dozen different nations now employed by the two clubs, the intensely parochial frenzy within the city is in some way insulated from the performers.

Vincent Kompany and Bastian Schweinsteiger do not hold that view.

Neither is a certain starter today. Pellegrini was furious that Belgium ignored doctors' advice that his captain needed training rather than an international match after nursing a calf injury since mid-September.

And van Gaal ponders on whether Schweinsteiger, though his experience is immense, can start three games in a week, with the travel to Moscow and back in between.

The pair are trying to talk their way into the line-ups.

Schweinsteiger, whom van Gaal has picked for every big match since signing in the summer, talks like a starry-eyed teenager of the buzz around town - his first experience of such a white-hot derby atmosphere between rivals in the same neighbourhood, both shooting for the league title.

Kompany believes that all the foreigners "get" the Mancunian feel. "I would say the talent this year is bigger than it ever has been," he says.

"But the personality (meaning character) of the first year when City won the Premier League was bigger."

Kompany's credentials to start for the first time in seven City games are persuasive.

His last five games before injury resulted in clean sheets for City.

The team have conceded in every game without Captain Kompany.

None of us, from Manchester to Beijing, know the line-ups until the managers show their hand, and let the 170th Manchester derby begin.