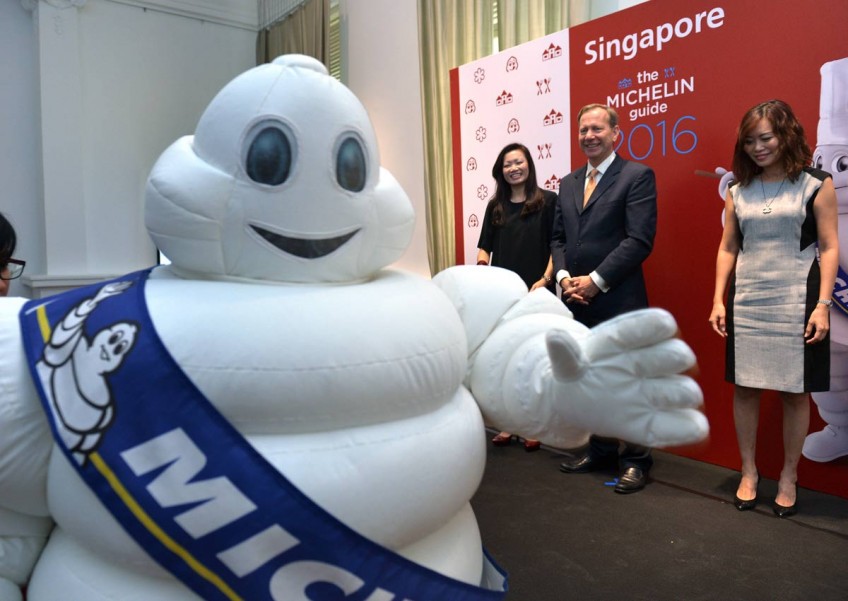 The famously anonymous Michelin Guide inspectors might not be so anonymous after all, judging from the buzz in the food scene around their visits to restaurants here.

Singapore's edition of the Michelin Guide is expected to be launched in the second half of next year. The French tyre company, which puts out the gastronomic guides, has always prided itself on having inspectors who dine anonymously, never take notes at the table and pay their bills at the end of the meal.

Michelin inspectors are known to eat at a restaurant several times during the year before awarding up to three Michelin stars. However, there have been several cases in Singapore of inspectors introducing themselves to chefs and restaurant staff, asking to inspect kitchens and giving out business cards with the Michelin logo on them.

The 11 chefs, restaurateurs and restaurant publicists The Straits Times speaks to confirm that this is happening.

They say inspectors stand out because they often dine alone, ask pointed questions about the food and wine and quiz staff about aspects of the restaurants.

One chef says the inspectors are "not particularly low-key" during their visits and he has even seen one taking notes during a meal.

There have also been instances where a chef is informed by the inspector that he "should expect visits" from his other colleagues.

A publicist says: "A restaurant was visited three times by the same inspector, who revealed his identity on the third visit when he returned to gather more information. I've heard that other restaurants have encountered similar situations."

In press materials given out at a media conference last month to announce the Singapore guide, Michelin says: "Working anonymously, the inspector is an ordinary customer who books a table in a restaurant, orders, dines, never takes notes during meals and pays his or her own bill. This anonymity is what makes the Michelin Guide so successful.

"Inspectors don't want to be treated differently from anyone else. In their plate, they have exactly what other customers are served. Nothing more, nothing less."

However, it also says: "It is only after paying their bill that inspectors may introduce themselves and ask for more information, if necessary."

The Michelin Guide did not respond to queries by The Straits Times by press time.

Those who have had encounters with the guide overseas say that such practices are not unheard of. They say that inspectors who have identified themselves are unlikely to visit the same restaurants again.

Restaurateur Loh Lik Peng, 43, who has restaurants such as Pollen at Gardens By The Bay, Restaurant Ember in Keong Saik Road and 5th Quarter in Syed Alwi Road under his Unlisted Collection group, says: "They approach the chef or staff as they need facts about the restaurant, likely towards the tail-end of their research. After they have done their ratings, they will also do interviews.

"They are pretty open and you can ask them what you need to do to improve. I don't think this compromises their anonymity."

He has had experience with the guide in his Town Hall Hotel in London, which used to house the Michelin-starred Viajante restaurant, which closed last year. Mr Loh's restaurants here have been visited as well.

A chef who has worked in Michelin-starred restaurants in France says: "They need to show that they did go to your restaurant. What if suddenly a restaurant goes from three to one Michelin star and no one had actually dined there?

"They would definitely request to see the kitchen and that doesn't mean you get a star. After all, getting the star is all about the full restaurant experience. If they enjoy the meal but your kitchen has cockroaches and rats, then, of course, you won't get one."

The chef of a two-Michelin- starred restaurant in Tokyo tells The Straits Times that while he has been interviewed by the same person for three years, that person is not an inspector.

The interviewer collects information on the restaurant for the guide, while the inspector does the anonymous tastings.

In Singapore, one restaurant says it received an e-mail from Michelin asking to set up an appointment to inspect the premises, but the person who turned up was not an inspector.

In other cases, however, the inspectors identified themselves to the restaurants, leading some chefs here to question the judging process.

One says: "You should never ever announce yourself. What's to stop staff from whipping out their phones and taking a photo of the inspector and passing it on to their friends in other restaurants?"

Another restaurant publicist says: "I really hope that the same yardstick is used here to compare our restaurants to the best in the world. If there is a three-Michelin- starred restaurant here, it should be of equal standard to those in another country. It should be judged on the same playing field."

This article was first published on Dec 19, 2015.
Get a copy of The Straits Times or go to straitstimes.com for more stories.