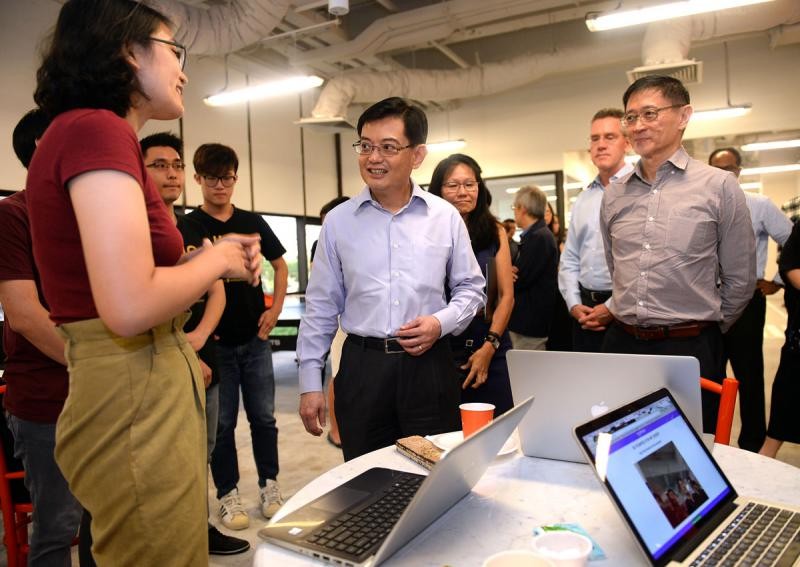 SINGAPORE is making a big statement about its enterprise and innovation ambitions, with Finance Minister Heng Swee Keat presenting on Friday SG-Innovate - an initiative to promote startups in new, emerging sectors - and a fintech (financial technology) office for startups.

"Innovation will be critical to our future. These initiatives will be very important in transforming our economy, and create better jobs for our people," he told reporters at BASH, a startup space at JTC Launchpad @ one-north.

SG-Innovate, which Mr Heng introduced in Budget 2016 last week, will be a company under the National Research Foundation (NRF), of which Steve Leonard, currently executive deputy chairman of the Infocomm Development Authority of Singapore (IDA), will be chief executive.

The overarching platform will facilitate the commercialisation of technologies created across the new, emerging sectors - smart energy, digital health, Internet of Things and digital manufacturing - leveraging the US$19 billion investment in the Research, Innovation and Enterprise 2020 plan.

SG-Innovate will build on efforts by Infocomm Investments (IIPL), the investment arm of IDA, which has since 2000 nurtured startups in the ICT (information and communications technology) sector, through partnering industry leaders, venture capitalists and accelerators.

IIPL will be re-organised as the first pillar (ICT) under SG-Innovate.

IIPL head Alex Lin told The Business Times: "IIPL will support all other pillars within SG-Innovate. ICT is very horizontal - it can create operational efficiencies, and even business opportunities in other domains. Robotics, for example, can help a pharmaceuticals company significantly reduce the number of clinical trials needed to validate a new drug."

Darius Cheung, serial entrepreneur and angel investor, said that while a sectoral approach is good, IIPL's venture capital model for ICT may not work for other sectors with a long runway to commercialisation, such as pharmaceuticals.

Supported by NRF, it will be co-led by Mr Leonard and Sopnendu Mohanty, chief fintech officer at the Monetary Authority of Singapore (MAS).

Said an NRF spokeswoman: "The FinTech Office is an example of SG-Innovate's active partnerships with private sector accelerators and government agencies to catalyse the creation and growth of startups in the various technology verticals." It is also part of MAS's vision to foster a Smart Financial Centre, and go beyond the financial industry to help nurture a wider fintech ecosystem, said Mr Mohanty.

On Friday, Mr Heng also visited The Hangar, a new 11,000-sq-ft co-working space at the National University of Singapore, where he was "very impressed with the energy . . . and the good interaction between the students, professors and the private sector". Universities should be centres of wealth creation, he added, in which students should not just acquire knowledge passively but use it to start up and "make an impact".

This article was first published on April 4, 2016.
Get The Business Times for more stories.