Here's sellin' to you, kid. Casablanca piano up for sale 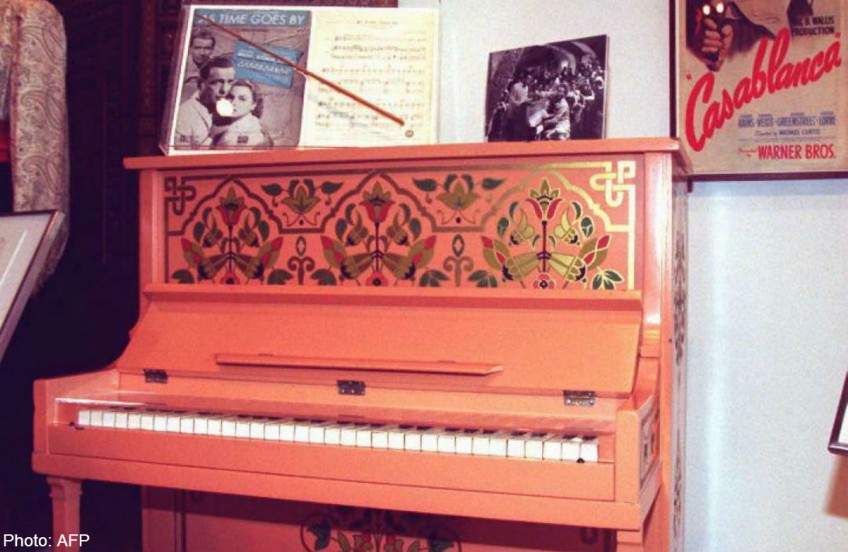 File picture taken June 13, 1996 shows the piano used in the 1942 movie "Casablanca" to play "As Time Goes By" sitting on display inside the Warner Brothers Studio Museum in Burbank, California.

NEW YORK - The iconic piano from Hollywood romance Casablanca goes on sale at auction in New York in November, the highlight of more than two dozen collectors' items from the fabled war-time classic.

"Play it, Sam," says a stunning Ingrid Berman, cajoling Dooley Wilson into singing As Time Goes By before a moody Humphrey Bogart storms over to find his ex-lover sitting in his nightclub.

Wilson's character Sam first played the song on the piano for Bogart's character Rick and Bergman's Ilsa when they fell in love in Paris as Nazi troops advanced on the French capital.

The salmon-coloured instrument is the star of more than 30 items from the 1942 black and white movie offered for sale on Nov 24 by Bonhams auction house and Turner Classic Movies.

Other lots include passports and transit papers created for the film, a final draft screenplay, signed photographs of the cast and production memos.

All of the lots come from a private collector.

"Bonhams is thrilled to represent this remarkable Casablanca collection, certainly one of the most significant film memorabilia collections still in private hands," said Catherine Williamson, director of Entertainment Memorabilia at Bonhams.

The sale also features a host of other collector pieces from other films, including a test dress and pinafore designed for Judy Garland for the 1939 production of The Wizard of Oz. The items will go on display in preview exhibitions held in Los Angeles from Nov 6-9 and in New York from Nov 20-24.

Casablanca is ranked one of the greatest American films of all time by the American Film Institute. The Warner Bros movie won three Oscars in 1943 for Best Picture, Best Writing (Screenplay) and Best Director.

It is perhaps best known for Bogart's catchphrase to Bergman "Here's lookin' at you, kid."