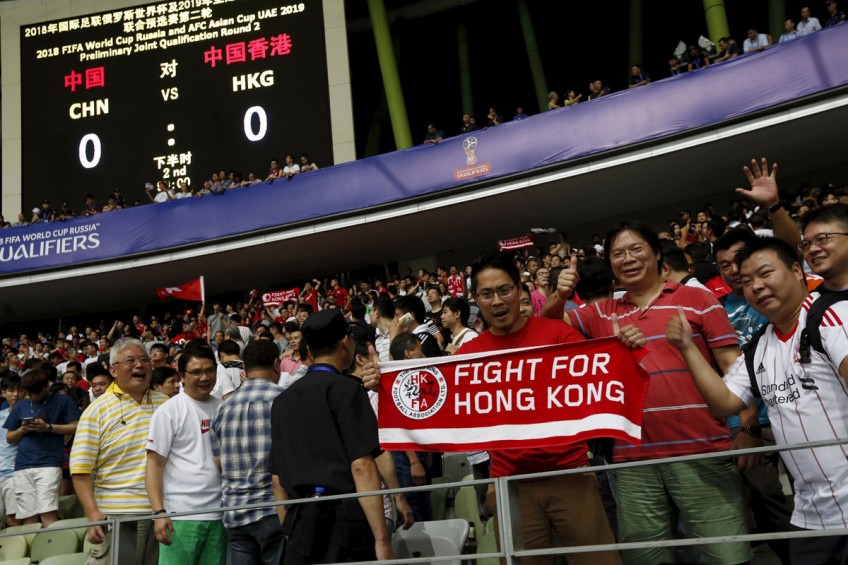 Tonight, Hong Kong and China will face off in a crucial World Cup qualifying match. Each 11-strong side will be accompanied by the 12th man - not the proverbial fans, but politics.

Amid testy relations between Hong Kongers and mainland Chinese, strict security measures are being taken for the game held at a stadium near where the most rambunctious of last year's Occupy protests erupted.

About 1,200 police officers will be on standby in Mong Kok, reported the local media, one for every five spectators in the 6,000-seat arena. Inside, 20 officers will be stationed - more than the usual 12.

In an unusual move, Hong Kong fans had to show their identity cards to prove they are Hong Kong residents before being allowed to buy tickets - a process that will be repeated tonight before they are allowed in. They also have to submit banners for approval to prevent political and other inflammatory material from making it to the stands.

There, they will be penned off in a separate section from their Chinese compatriots and restricted to different toilets and food stalls.

Fierce football rivalries are hardly unusual across the world, with brawls breaking out on and off the pitch between teams and between supporters. But the game tonight has an added frisson, given the political tensions in Hong Kong.

Last year, tens of thousands of Hong Kongers shut down major roads in Admiralty, Mong Kok and Causeway Bay in a bid to wrangle unfettered rights from Beijing to elect their leader. In Mong Kok, in particular, violence broke out regularly between the protesters and those who opposed their cause.

The 79-day movement sharpened a growing sense of distinction between Hong Kongers and their mainland brethren. Residents in the city who identify themselves as "Hong Kongers" or "Hong Kongers in China" now stand at 63.7 per cent, up from 42.5 per cent in 2008, as compared to those who call themselves "Chinese" or "Chinese in Hong Kong", according to a University of Hong Kong survey.

Dismayed at its failure to win Hong Kongers' hearts 18 years after the handover, Beijing has tightened its grip on the city, with what critics decry as interference in domestic affairs, ranging from university appointments to media control.

While Hong Kong has been part of China since 1997, it sends its own teams to international sporting events, such as the World Cup and the Olympics.

But it was only this year that Hong Kongers began booing their national anthem - March Of The Volunteers - when it was played at home matches against Qatar, Bhutan and the Maldives.

Hong Kong Football Association chairman Brian Leung told The Straits Times: "In the past, there was no such booing. We should separate sports from politics, but we are now seeing such behaviour perhaps due to "zhong-gang mao dun" - the discord between China and Hong Kong."

It did not help that, ahead of the qualifiers, the Chinese Football Association described Hong Kong's players as "black-skinned, yellow-skinned and white-skinned" and urged its fans not to underestimate a team with such "depth".

Adding to the cauldron of heated emotions is the fact that the stakes for tonight's game are high.

Both sides are battling for a spot in the third round, with Hong Kong lying second after Qatar and China third in their group, and the top two advancing to the next round. During their last face-off in Shenzhen, also held under heavy security, China and Hong Kong drew 0-0.