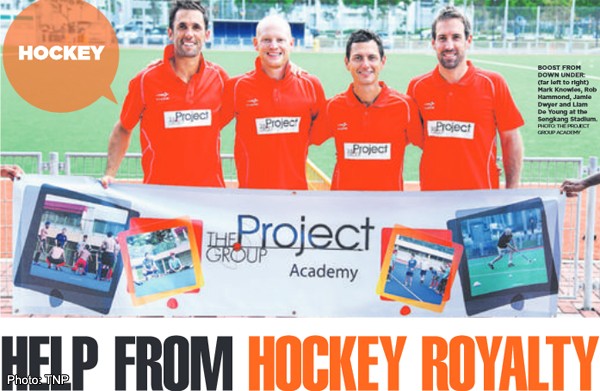 The plan was to give back to the sport that helped shape his life, and raise the standard of the game here.

But, after sponsorship talks with the Singapore Hockey Federation (SHF) fell through last year (see graphic), Paul Lim took the path less travelled, one that led him into the company of the sport's royalty.

Instead of working hand in glove with the SHF, the managing director of The Project Group (TPG) - a consultancy firm focused on the property and construction industry - now finds himself in the final stages of discussion over a two-year deal with Hockey Australia.

"We are in the final stages of discussions for a two-year sponsorship deal that will see both the men's and women's team wear our brand on their jerseys at tournaments," Lim told The New Paper yesterday.

Australia's men are the defending World Cup and Commonwealth Games champions, while their women - the Hockeyroos - are ranked second in the international standings and also struck gold at the 2014 Commonwealth Games.

Former Singapore goalkeeper Lim revealed that in addition to a yearly sponsorship fee paid to Hockey Australia, an Olympic rewards scheme has also been tabled, with bonus payments made out to players depending on where they finish among the medals in Rio de Janeiro in 2016.

TPG and Hockey Australia are scheduled to put pen to paper and formalise the partnership some time next month.

After failing to come to an agreement with the SHF, Lim set up the TPG Academy last December, and kicked off operations by arranging for the Republic's hockey men to train with four Aussie greats, Jamie Dywer, Mark Knowles, Rob Hammond and Liam De Young, as they gear up for June's South-east Asia (SEA) Games.

It was then that the link with Hockey Australia was made.

"What we wanted to do with the SHF was pretty much similar, a sponsorship deal that will also see top-level players come and coach.

"But that deal fell through, and now we're doing it with Hockey Australia instead, but still with a view to helping the sport here," said Lim.

Lim had approached the SHF to talk about a sponsorship deal worth more than $200,000, including supplementing the wages of five national players who would train full-time in the lead-up to June's SEA Games.

But, following what he claimed was administrative delays at the SHF, Lim ditched the original plan and decided to use the TPG Academy as the vehicle to help the national players.

"For me it is all about improving the sport in Singapore and through this partnership, we are looking at having both (Australia's men's and women's) teams come here for training trips in their lead-up to the Rio Olympics," he said.

"That will give players here a close up look at what high-level hockey is about - and the Australians will also train our players."

As part of the TPG Academy programme, four of Singapore's women players, including captain Laura Tan, flew up to Perth with Lim last weekend to watch the Hockeyroos train.

This weekend, Dwyer, Knowles, Hammond and De Young will be back in the Lion City, along with some of the game's best women players, to train with local players under the TPG Academy programme.

"Honestly, if not for Hockey Australia, I'd never have picked up the sport in the first place," said Lim who spent the first 18 years of his life in Brisbane, before returning to serve out his National Service obligations - and keep goal for the Singapore national team.