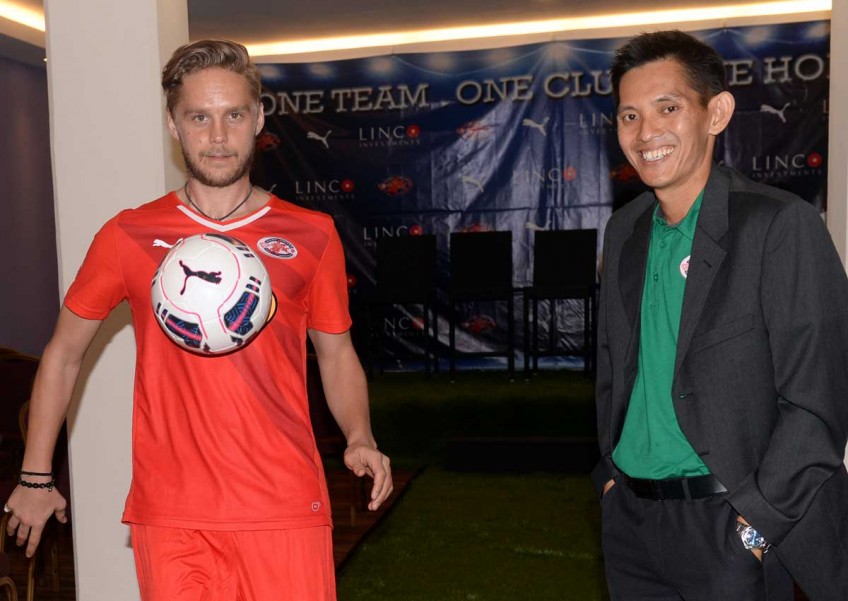 At the start of the season, you said Home United are a team that have to be challenging for honours. At this stage, are you satisfied with how the season has been going so far for your team?

Philippe Aw: We have a rather new team, and we had some setbacks after a decent start. After going unbeaten for our first four games, we lost key players like Noh Rahman and Ken Ilso to injury.

It took us some time to settle down and cope with their absence in the first round. There were games we played well but couldn't convert and we dropped points.

But going into the third round, we are starting to look solid now.

We have not given up on the S.League and the RHB Singapore Cup.

We are 10 points behind with 24 to play for. A realistic target would be the top three and winning the Cup.

But this is a very competitive league and we have seen the bottom teams take points off the top teams.

So anything can happen. As long as we are still in the mix, we will make a late push for it.

What I want is for us to finish the season well.

You have risen through the Home United ranks as a player, then as a youth coach before graduating into your first season as an S.League head coach. You are one of those who are open to blooding youngsters. Why is this so?

With youths, it's like a piece of blank canvas.

With older players, the canvas already has something painted on it. The trick is making the picture more beautiful.

Our club have had a change of vision. We launched the Home United Youth Football Academy at Mattar Road last year and we want to embark on this new project of grooming youth footballers.

We won't see the fruits of this labour in a short time, but we hope to see them in the long run.

And we are not rushing to just throw young players into the deep end too. We have to pick the right players and blood them at the right time, pair them with an experienced head who will guide them so the youngsters don't go in blindly.

So, which of your young players have impressed you this season?

This season, R Aaravin has stepped in in Noh Rahman's absence and played many games.

Another Prime League defender, Shahrin Saberin, came in for our last two games which we won against Courts Young Lions (2-0) and Hougang United (1-0) and he didn't look out of place with two good performances.

What we are certain of is we will not be scared to give young footballers opportunity.

Many people have already written off Home United from the S.League title race. Does this take the pressure off you somewhat? Or do you still feel the pressure of having to deliver a first league title since 2003?

The pressure is always there. We are Home United after all. We are a big club with big ambitions.

But what has helped is the management has been clear in their vision and we work hand in hand to achieve this.

It doesn't mean that we cannot win trophies because we are fielding youngsters.

What is important is we keep our foundations strong.

Good teams are not built overnight. This means we have to keep our team together for a few years. And I believe this is the right way forward.

Going into your next game against Tampines Rovers, Home United are on a seven-match unbeaten run while the Stags have a patchy record over the same period. Surely you must be confident of a good result?

Tampines are an experienced team and they would want to get a good result as soon as possible and forget about their defeat by the Young Lions.

They are a good team and take our preparations seriously like we do for every game. We won't take them lightly just because they lost their last game.