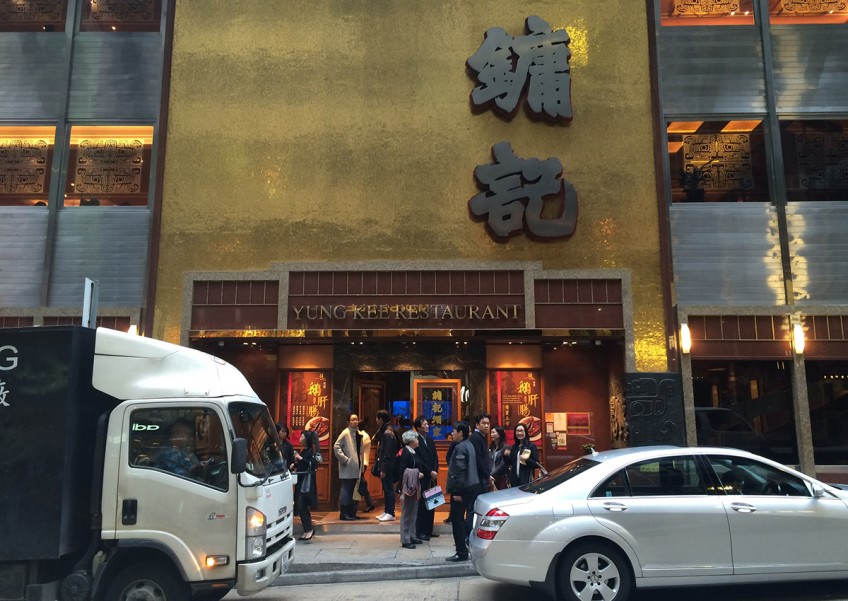 HONG KONG - It is 2.30pm on a Wednesday and lunchtime diners are spilling out of a multi-storey restaurant in Hong Kong's Central district, happy and well-satiated.

Inside, more are devouring Yung Kee's juicy roast goose as if it is their last.

It may well be. Tomorrow, the 73-year-old restaurant - a go-to for local families and a pilgrimage site for tourists - could be putting its woks and ovens in storage.

The families of two feuding sons of the late founder, Kam Shui Fai, have been ordered by the courts to reach an agreement over their competing stakes. If they do not, the company will be liquidated.

It is a classic Cantonese melodrama of brothers-turned-foes, kitchen intrigue, an old widow's desperation to retain the love of her sons, a billion-dollar property and Michelin stars won and lost.

In an interview with The Straits Times, Hardy Kam, 42, the founder's grandson, rues over what used to be a close-knit family that even emigrated to Vancouver together before the 1997 handover.

Today, the feuding camps still live in the same residential building in Causeway Bay, where the founder had bought units for his children's families.

Hardy says ruefully of his cousins: "Now, when we see one another in the lift, we don't acknowledge one another. We are like strangers."

At loggerheads were the founder's first and second sons, respectively Kinsen (who died in 2012) and Ronald. Hardy is Kinsen's younger son.

Upon their father's death in 2004, Kinsen and Ronald were granted equal shares with the understanding that they were to run the restaurant together.

But Kinsen later found himself sidelined in the business, says Hardy, when his brother brought in his son as a director. Their mother then gave her shares to Kinsen, while their brother Kwan Ki and sister Mei Ling gave theirs to Ronald, making him the majority shareholder.

After Kinsen died of cancer, their mother switched allegiance to Ronald, saying she had no one else to follow.

Hardy, who was working as his father's personal assistant, says: "He was called names in front of managers. They ganged up on him.

"For my father, it was the worst time of his life. He was being backstabbed. And even worse, it was within the family. It would have been easier if they were just business partners."

Ronald's family declined to be interviewed. But local magazine Eastweek's interview with Mei Ling suggests that there were concerns about Kinsen's sons' aptitude in taking over the business.

Wanting out, Kinsen asked for his share of the company - which he estimated then to be about HK$950 million - to be paid out to him, but his brother refused.

Now with both sides forced to settle, the question is how much the company - which includes the restaurant, the building that houses it and other assets - is worth.

Ronald, whose children are now running the restaurant, has offered up to HK$1.1 billion (S$200 million). Kinsen's family believe they are entitled to HK$2 billion and put a counter figure on the table.

If they do not reach an agreement by tomorrow - which is already an extension of an original deadline - liquidators may move in, have the company sold, possibly by public auction, and the proceeds split.

This would be an ignominious end to an empire that Kam Shui Fai built up from a small dai pai dong (street stall) in Sheung Wan. Besides Hong Kongers, the restaurant is immensely popular among foreign visitors including Singaporeans, who form the second-largest overseas customer base after the Chinese.

To some extent, the restaurant has already been hurt by the dispute, if not the negative publicity.

In 2011, Yung Kee lost the one Michelin star it was granted in 2009. Hardy alludes to how things have changed from his grandfather's time, when the roast goose and other meats were "all prepared in-house and on occasion", due to "costs savings".

On why his father, who was in charge of the kitchen, did not stop such changes, he says: "It was two (directors) against one. As my uncle said, majority rules."

Yung Kee had also become known for its practice of profiling customers according to how much they were likely to spend.

Hardy says: "It has lost its identity. Now it's about serving luxury in the heart of Central."

He and his brother Kevin, who both trained at Yung Kee, set up their own establishments last year.

On a Thursday afternoon, Kam's Roast Goose - which uses the same Chinese supplier of geese as Yung Kee; its head chef was also from the restaurant - was packed to the rafters. It sells 100 birds a day - the same as Yung Kee, says Hardy.

Keeping any suggestion of schadenfreude out of his tone, he adds: "It's a project dedicated to my father and grandfather. I'm carrying on their legacy with my limited resources. Grandfather didn't start with five storeys in the heart of Central."

There is another lesson from Yung Kee: "Maybe the way my brother and I are running our businesses independently is a good thing."

On whether his family wants to see the company liquidated for higher profits and even to move in as the buyer, he says: "Someone can be the buyer, it could be us too. Given the opportunity, I would like to go back there.

"But the best thing is that they will buy out our share and we sell. It'd be clear cut that way. So much has happened, the stress and pressure on our family members. None of us wants to drag it on for another two years."

This article was first published on December 15, 2015.
Get a copy of The Straits Times or go to straitstimes.com for more stories.