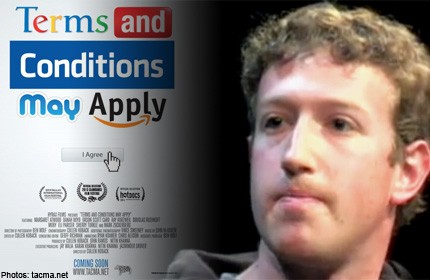 WASHINGTON, District of Columbia - Stalking isn't Cullen Hoback's style, but the chance to confront Mark Zuckerberg about the dark side of the Internet was just too good to pass on.

"Mr Zuckerberg? I'm working on a documentary," the independent filmmaker asked the Facebook founder, strolling in a T-shirt and jeans on the leafy sidewalk outside his southern California home.

"I was wondering if I could just ask you a couple of questions? Do you still think privacy is dead? What are your real thoughts on privacy?"

"Are you guys recording?" Zuckerberg sheepishly replied. "Will you please not?"

"I can stop," said Hoback, switching off his video camera, prompting Zuckerberg to loosen up, smile and invite Hoback to connect with Facebook's PR team - unaware that Hoback was still recording with a pair of spy glasses.

It's a telling scene in "Terms and Conditions May Apply," in which Hoback raises disturbing questions about the mountains of online data being collected, shared and stored by governments and Internet giants alike.

The title derives from the rambling fine print most Internet users never bother to read when they sign on to a new online service or app - blissfully ignoring that they're entering into a legally binding contract.

"I think the craziest thing about this whole experience is that I didn't realise I was making a horror film," the Los Angeles-based Hoback told AFP in a telephone interview.

Its release dovetails, by coincidence, with revelations from former National Security Agency (NSA) contractor Edward Snowden about the global scale of US online surveillance.

Snowden, currently stuck in a Moscow airport hoping for asylum, has revealed how major telephone companies are sharing customers' call data with the NSA, the secretive US electronic intelligence service.

He also lifted a veil on the PRISM programme that enables the NSA to issue directives to Internet services like Google or Facebook for access to non-Americans' emails, online chats, pictures, files and videos.

"I think there was already a pretty strong concern in the population" about online privacy, Hoback told AFP.

"But everything that's happened around Snowden and the PRISM scandal and the consistent revelations that are coming out right now are, I think, elevating interest in the film to a whole new level."

Two years in the making, "Terms and Conditions" was pretty much complete by the time Snowden came forward, leaving Hoback just enough time to tack a quick mention of the whistleblower onto the end of his film.

"The story is constantly evolving, and it's hard sometimes to put the keyboard down and stop editing," he said.

While it makes no blockbuster revelations, "Terms and Conditions" succeeds in weaving a series of Internet privacy issues over the years into a single narrative that's still playing itself out in real life.

For a typical Internet user, it says, it would take 180 hours - the equivalent of one full month of work a year - to fully read all the terms and conditions attached to his or her favourite websites.

"They're poorly written and they're exhaustive. They take into perpetuity everything you could ever imagine," said Hoback, for whom Internet privacy is "the biggest civil liberties issue of our time."

Google's terms of service, for instance, clocks in at 1,711 words, according to an AFP count, not including a separate 2,382-word privacy policy that is still about 1,000 words shorter than the Google Chrome browser policy.

"Terms and Conditions" also explains how Internet users, by clicking on a website's "agree" button, consent to their online lives being archived, shared with third parties or passed on to government agencies without notice.

"I really think of the audience as the main character, because this has been happening to us for all of these years," said Hoback, whose 2007 documentary "Monster Camp" examined the cult world of action-figure enthusiasts.

"The problem is, right now, you either get the service (you want to use on the Internet) or you don't," he said. "There's no one sitting at your side of the table negotiating these contracts."

As for his sidewalk encounter with Zuckerberg, whose social media colossus has come under fire for modifying its user policies without notice, Hoback said he wanted to make a point.