How an 'angry fat loser' became a fashion icon 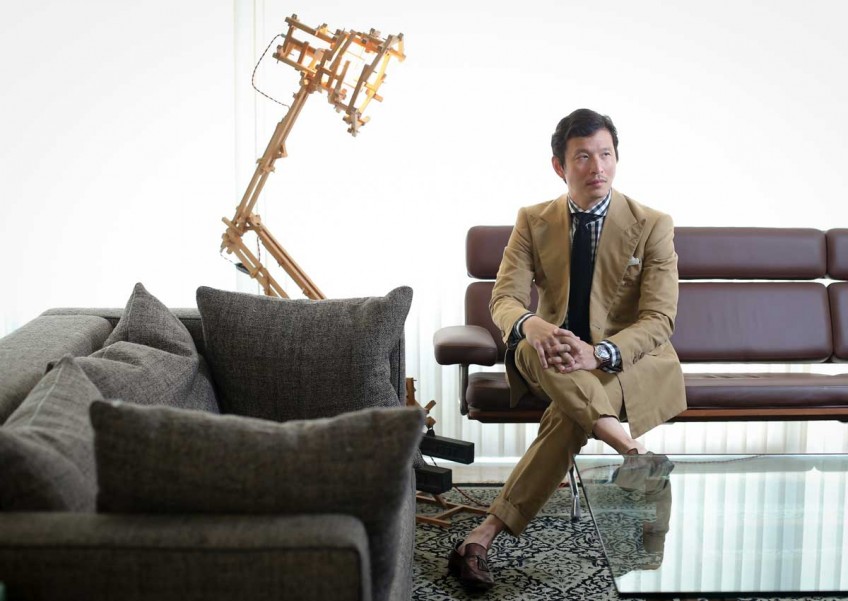 Mr Wei Koh worked a myriad of jobs – from ranch hand to Hollywood director’s assistant – before he decided to start Revolution, his own publication on luxury watches, in 2005. Four years later, The Rake was launched, as he could not find a men’s magazine he wanted to read.
The Straits Times

Mr Wei Koh strolls into his office at Henderson Road, and man, does he look dandy.

The watch, just delivered in the morning, is a 1998 Panerai PAM 27A Luminor Power Reserve.

"This is the second watch of this model ever made because the first one is in the Panerai museum," the 46-year-old says.

The timepiece and sartorial spiffiness befit a man who has founded two of the world's most successful magazine titles. Revolution, a quarterly publication, has 16 global editions and the largest print circulation among watch magazines in the world; The Rake, a luxury men's lifestyle magazine, has five editions and is stocked at, among other places, Harrods, Saville Row tailors and in rooms at the Claridge's in London and the Mandarin Oriental in Paris.

That the founder of these two titles is Singaporean is a fact not known to, and that surprises, many.

It amuses Mr Koh himself too that his publications have made him an arbiter of all things fine, tasteful and cool because when he was growing up, "loser" was the label he often found stuck to his back.

Finding where he belonged and making sense of his life, he says, took him a long time.

But Mr Koh - a former ranch hand, film assistant, scriptwriter and journalist - believes his experiences, with a little help from serendipity, led him to where he is.

Deep-voiced and with a knack for articulating his thoughts in graceful sentences, he was born in New York and has a younger brother.

His father is Professor Tommy Koh, who was Singapore's permanent representative to the United Nations for 13 years and ambassador to the United States for 10; his mother is Dr Poh Siew Aing.

He attended the United Nations School, where he learnt French and mixed with children from different cultures.

It was a good school but he grappled with issues brought on by his desire to be an American.

He hated taking Chinese lessons because he felt they were embarrassing and irrelevant.

It did not help, he says, that he then fulfilled many of the stereotypes associated with being Asian: he was overweight and myopic and was inept at sports.

"My mother also insisted on cutting my hair so for the first part of my life, I had the haircut of an angry lesbian," he says jokingly.

When he was 10, he convinced his parents to send him to Aruba in the Caribbean to learn tennis over the summer.

There, he had a massive growth spurt and came back to New York, no longer fat. But he did not lose the chip on his shoulder.

"I was just angry. I was a fat loser and I wanted to be a bit of a bad boy," says Mr Koh, who took to carrying a knife to school.

When the school found out that he threatened a schoolmate with the weapon, it asked him to leave the following year.

"I wasn't trying to stab him, I just took it out while speaking to him. The school said, 'You could just remove yourself, it won't be on your record.' I thought that was very nice. To this day, when I have a staff who is not working out well, I'll tell him, 'I don't want to fire you. Why don't you leave and I'll dwell on the positive aspects of your character?'"

The next few years saw him barrelling through several schools in New York, Connecticut and Washington.

His esteem issues continued to dog him. To cope, he started smoking and drinking. He went to Studio 54 - the infamous New York nightclub - when he was 13.

At a boarding school in Connecticut, he encountered racism.

"People didn't really mix and you were made to feel self-conscious that you were Asian. For the first time, I got beaten up and pushed around although there were also people who were fair," he says.

"You know the feeling when you walk into a lunch room and you don't know who to sit with and you feel that everyone is looking at you? That was the first time I felt that. It still makes me self-conscious to this day, the same way a bunch of laughing teenage boys still set me on edge," says Mr Koh, who sought solace in alcohol.

At 16, he managed to get into Vassar, a liberal arts college in New York where the alumni included actress Meryl Streep and Pulitzer prize-winning writer Jane Smiley.

"I had no idea what I wanted to do. In retrospect, I should have, like my brother, gone to NS first and spent 21/2 years thinking about my future," he says.

Thinking that banking would make him the big bucks to afford a fancy car, he took economics as a freshman and statistics in his sophomore year but did miserably.

A stint at Dartmouth College in his third year made things better.

"For the first time, I had really inspiring teachers. My professor made Hinduism totally riveting," says Mr Koh, who ended up with a degree in comparative religion.

Coming home to serve national service, he says, was "like entering a foreign culture".

For the first time in his life, he got to live with people from different socio-economic backgrounds.

In fact, he did so well that he was best trainee in his platoon and got into Officer Cadet School.

He spent the rest of his NS training recruits before heading back to the US. Through his father, he landed a job in the biggest cattle ranch in Montana.

"I've always been fascinated by the American West and I wanted to experience the vastness of America."

Any romantic notions he nursed about being a cowboy were dashed when he arrived at the ranch in Grass Range.

"It's the highest position in a ranch. I started at the bottom. I was the Asian 'shovel-cowshit' boy , the 'pick-rocks-out-of-the-field' guy before becoming a general ranch hand, feeding cows and mending fences."

After what he describes as an amazing year, he moved to Seattle to be with his then girlfriend. A movie buff since young, he decided to enrol at the film school in San Diego State University.

Upon graduation, he scored an internship at a film company headed by Alex Kitman Ho, who produced movies including war dramas Born On The Fourth Of July and Heaven & Earth.

Through the film producer, he met Kathryn Bigelow, the first woman to win the Academy Award for Best Director, for the film The Hurt Locker (2009).

Mr Koh worked with the director for four years, assisting her in project development.

Tinseltown, however, was not the place he thought it was.

"I rapidly realised that it was one of the most atavistically and openly mercenary places in the world. 'Can you help me with something because if you can't, I'm not interested to spend time with you.'"

A couple of events conspired to make him come home in 2000.

Although a college friend who was also an investment whiz helped him to turn US$20,000 (S$27,000) into US$1.3 million during the dot.com boom, more than half the gains he made were wiped out on the very day he was supposed to finalise a deal to buy an apartment in New York.

The final push came when he received distressing news that his mother had breast cancer. She has since made a complete recovery.

In Singapore, his godbrother introduced him to local film-maker Eric Khoo. He ended up being the scriptwriter and co-director for football comedy One Leg Kicking, which received mixed reviews but was the highest-grossing local film in 2001.

"It was hard. I had to ask myself if I had any potential, and very conceivably, I don't. The other thing is, I don't like waking up in the morning and not having a job to do."

He decided to get into journalism instead, freelancing for various publications including The Sunday Times and the now-defunct East magazine.

That was how he started writing about watches. His innate interest, coupled with his penchant for meticulous research, soon saw him offered more watch articles than he could handle.

The positive feedback he received did a lot for his morale. But there were frustrations, chief of which was not being able to afford the timepieces he was writing about.

"My father said, 'Why don't you go to Insead? I'm sure you can get a decent job after that and afford any watch that you want'," he says, referring to the famous graduate business school.

His brother Aun, a lifestyle marketing consultant, told him he should think of a cool business model if he were serious about applying for Insead.

And that was when Mr Koh articulated his idea for Revolution, which sets out to grow the audience for watches with cool articles incorporating "art, music, hot girls" and other aspects of popular culture.

The next day his brother introduced him to a friend who was interested in investing in a watch magazine.

"We ironed out a deal in half an hour," he says, referring to Dr Bruce Lee, a chiropractor who is now his partner.

The first issue of Revolution hit the stands in March 2005. Besides conceptualising the cover and all the photoshoots, Mr Koh wrote all of the articles, and even used pseudonyms to give the impression that he had other staff on board when it was just him and an advertising sales executive. The layout and design were farmed out to design houses.

Profitable from the first issue, the magazine made a splash at international watch fairs like Basel. Buoyed by the positive reaction, Mr Koh and Dr Lee started an American edition the following year.

Today, Revolution has 16 editions in countries including China, Switzerland, Mexico and the United Kingdom.

In 2009, he decided to launch The Rake because he could not find a men's magazine he wanted to read.

Mr Koh, who is married to former fashion editor Joycelyn Shu, wanted a publication which not only talks about timeless style and gentlemanly pursuits but also offers insights into luxury and craftsmanship.

Initially meant for distribution in Singapore and Hong Kong, The Rake got a fillip when Mr Koh started receiving a ton of inquiries from readers abroad. Now besides the international edition, The Rake also has licensed editions in Russia, the Middle East, Turkey and Japan.

One of the magazine's biggest fans is restaurateur John Winterman, who runs the acclaimed eatery Batard in New York.

He tells The Sunday Times: "The Rake and the writers breathe a different quality of air... and pull it off without snobbishness... It is about the grand meeting of taste, style, culture and, most importantly, irreverence."

Because the bulk of its readers now come from abroad, Mr Koh moved The Rake office to London two years ago. The magazine's stable of contributors include Nick Foulkes, whose works regularly appear in The Financial Times and Vanity Fair.

Earlier this year, it branched into e-commerce, working with designers, shoemakers and other artisans to offer exclusive merchandise to its readers.

His publishing company now has about 100 employees all over the world.

So is Mr Koh an archetypal rake?

"A rake, by my definition, and there are many different definitions, is a person who, knowing the rules, does what he wants and breaks them according to how he feels. But he always does this from the perspective of education.

This article was first published on July 03, 2016.
Get a copy of The Straits Times or go to straitstimes.com for more stories.