How to make your instant noodles healthier instantly 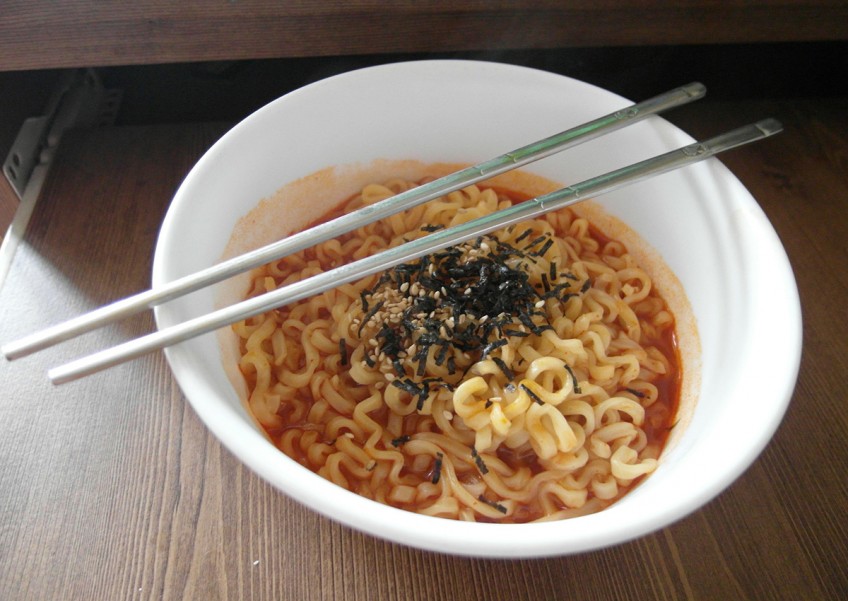 Instant noodles are a household staple in most Asian countries. We eat it as a snack, as a main meal, as comfort food, or when strapped for cash.

When calamities such as earthquake or floods strike, instant noodles are sent in huge amounts in relief efforts as emergency food aid. In two or three minutes, your meal is ready and gnawing hunger subsides.

According to a May report published by the World Instant Noodles Association, the world gobbles 102.7 billion instant noodle servings a year.

But is consuming one too many instant noodles all that bad, especially when you hear talk of people losing hair and having a higher risk of metabolic syndrome (a group of symptoms including obesity, hypertension, elevated blood sugar and low levels of HDL cholesterol)?

Not necessarily so, says Dr Tee E Siong, president of the Nutrition Society of Malaysia.

"Many people think eating instant noodles is toxic and harmful, but it's not true. Some people overuse and abuse it … it's not meant to be eaten five times a day!" he says, debunking the myth.

"It's like eating bread. It doesn't make you fat unless that's the only thing you consume every day."

Instant noodles are full of carbohydrates and fat, and have little protein, fibre, minerals and vitamins, so it has to be alternated with other foods to obtain a balanced diet.

He says, "Eating an oatmeal cookie or breakfast cereal might be a healthier option. With instant noodles, don't add all the flavouring. To make it nutritionally balanced, throw in some fresh vegetables, an egg, minced meat or sardine. It only takes an extra three minutes to prepare and you'll have a full meal."

Indeed, more people are eating instant noodles now compared to 30 years ago. It's even served on long-haul flights as a snack. It's convenient, but can be a cause for concern.

"We need to have nutrients throughout the day. How much you eat, how you eat and how food is cooked is important."

Instant noodles go through a process of slitting or cutting the noodle dough into strands. It then undergoes steaming and frying in normal cooking oil, which naturally prevents the noodles from sticking together. Contrary to popular belief, no wax is used.

The main ingredients of the dried noodle are wheat flour, palm oil and salt. Most instant noodles are made of a milled, refined and bleached version of wheat flour.

As it is highly processed, though richer in flavour, it is hardly nutritious by itself.

Dr Tee isn't sure why MSG has garnered such a negative perception.

He says, "If you look at the food regulatory bodies in the world, no one has banned MSG. There is no scientific evidence that shows MSG is bad for health. The Japanese have been using it for centuries, and they're healthy. I would encourage people to use MSG judiciously in place of salt. MSG actually has no taste - it's just a flavour enhancer which has less sodium than salt."

Although people tend to use these two terms interchangeably, salt and sodium refer to two different things. Sodium is most commonly eaten as a component of table salt, which is only partly sodium. Table salt contains 40 per cent sodium and 60 per cent chloride.

Sodium also exists in most whole foods, but in a very minimal amount.

Because instant noodles are a highly processed food item, can the body digest it well?

In a first-of-its-kind experiment in 2012, gastroenterologist Dr Braden Kuo of Massachusetts General Hospital in the United States carried out a small clinical trial by rounding up a few test subjects willing to swallow the processed meal along with a pill-sized video camera.

His intention was to see the churning process inside the stomach and digestive tract after the noodles were consumed.

Astonished by the findings, he posted the video online and it went viral. The video showed that the stomach took close to a couple of hours to digest and completely breakdown the noodle strains as opposed to homemade noodles.

The specialist explained that the processed nature of these noodles usually make them hard to digest.

However, Dr Kuo admitted that the study was too small to conclude anything.

"It's still not really clear the impact it has on the gastrointestinal tract and whether the slower digestion affects the amount of nutrients the body absorbs," he was quoted as saying.

As Malaysians, we are bonded in our common love for local cuisine. Eating is our national pastime and we can be found chomping down food at any hour of the day: rain, shine or full moon.

"This easy availability of food is to our detriment. Our incessant eating is no longer about how hungry we are, but about the fact that mamak stalls are just five minutes away for our fix," Dr Tee writes in his recently published book, Malaysian Diet: The Plain Truth.

"We don't have to give it up! We can continue to enjoy the delicious food around us, but learn to practise moderation and make wiser food choices so that we can have a makan secara sihat culture."

Dr Tee provides handy tips on how to make the most of a meal.

He further writes, "One food does not make up a whole meal, or the entire day's nutritional requirement. The nutrition information panel (NIP) can help you balance your daily food intake. Remember, there is actually no such thing as 'bad' nutrients. Our body needs energy, etc. However, excessive consumption of these are to be avoided, even for the so-called 'good' nutrients."

A particular type of food can be cooked in a variety of ways. When it comes to instant noodles, clear soup is a much healthier option than curry.

Eating an occasional package of instant noodles won't be detrimental, but when you make a habit of substituting convenience foods for real food, it's only a matter of time before health problems set in.

Moderation is the key to better health.

Dr Tee says, "I find that many Malaysians tend to overdo things they like. We don't seem to take obesity seriously. Our urgency in prevention of diseases is just not there. I've been preaching this for 40 years and haven't seen a decline in statistics yet. In fact, I get e-mails from women asking how to quickly fit into their wedding gowns!

"Parents are leaving healthy eating to the maids and we see an increase in childhood obesity. It used to be a rich man's disease, but not anymore. When I did a study 15 years ago, rural children were less obese, but now, the trend is reversed. The lower middle income group seems to be more afflicted with non-communicable diseases."

The nutritionist reckons we have to educate the taste buds from young so that the child will stay away from oily, salty or sugary stuff. Taste can be acquired and taste buds can change.

"We have to invest in the young because reversing damage is hard. We need to have nutritionists in all parts of Malaysia, including the villages. If we are going to be serious about preventing obesity, we have to go down to every level, not only the urban areas. Ideally, we need every school in the country to have nutritionists," he concludes.