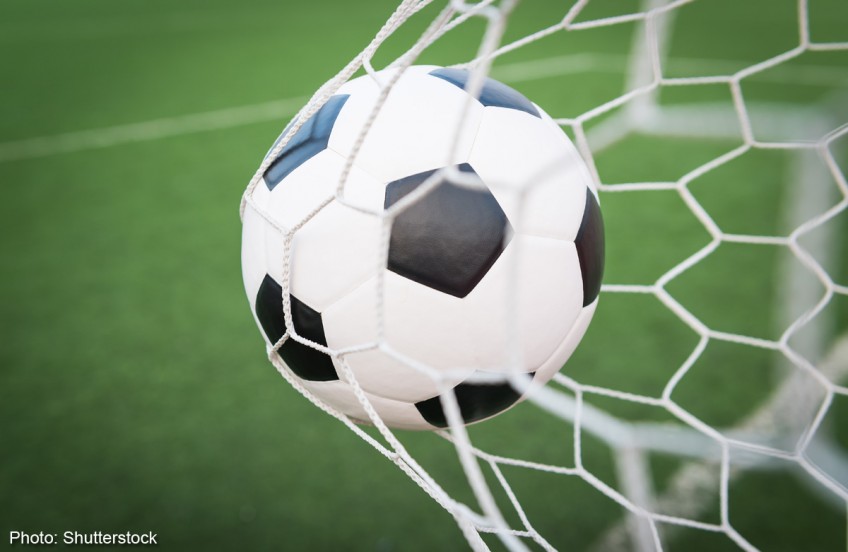 BEST CONSPIRACY SINCE JFK GOT SHOT: EVERYONE AT FIFA

If Fifa's bigwigs had been in chance of the Kennedy assassination investigation, their final report would've read: "Kennedy got shot. He died. That concludes our investigation."

Stephen Hawking is easier to understand than a Fifa press release.

If, in 2015, Sepp Blatter (above)were found standing over the body of Michel Platini, holding a smoking gun and jumping up and down and shouting: "I did it, I did it, I'm glad he's dead, I hate the French," Fifa would still re-elect him unopposed.

He is the Daniel Day Lewis of biting awards. He makes Hannibal Lecter look like a gummy, toothless uncle.

Suarez has bit into more footballing flesh than a WAG. His antics against Italy make him an obvious award winner.

But the honour will probably be retired and replaced with the Olivier Giroud head-butt award.

They were spotted at their hotel in Manaus ahead of their World Cup opener.

They even lined up alongside the Italians before kick off. They were never seen again…

BEST USE OF A THONG: THE BRAZILIANS

Spending a month travelling across Brazil for The New Paper left many World Cup highlights, but one memory will never leave me.

On a face-meltingly hot beach in Manaus, I spotted three generations of the same family - wearing a thong. The daughter, the mother and a grandmother, perhaps in her early 80s, all had nothing more than dental floss between the cheeks.

Ageism be damned. Live and let live, I say. I'm just saying that when you see a proud grandmother, in her 80s, wearing a G-string, you never forget it.

Give him a credit card and a transfer window and the resemblance is uncanny. The Liverpool manager is one more impulse buy away from getting his own reality TV show.

Do you remember those halcyon days when the Toffees were playing attractive football and challenging for the top four? No, I can't either.

That man was really based on Diego Costa (left). His birth certificate says he's 26. His physical appearance suggests he's 26 in dog years. By the end of 2015, boy scouts may feel obliged to help him across the road.

The Arsenal manager said of his striker Olivier Giroud: "He's normally in control, a calm guy."

In the last year, the French striker has been caught in a hotel room before an Arsenal game with a woman who was not his wife. Yesterday morning (Singapore time), Giroud head-butted QPR's Nedum Onuoha.

Apparently, Wenger has also said of the Arsenal defence: "Normally, they are in control, a calm defence."

According to that famous philosophical question: "If a tree falls in a forest and no one is around to hear it, does it make a sound?"

Likewise, if Burnley, Leicester, Crystal Palace and West Brom fell out of the Premier League, would anyone notice?

It's common for all relegation candidates to struggle for media attention, but these teams have so far offered all the entertainment value of a paint-drying contest. At least QPR have Charlie Austin and Harry Redknapp's interviews.

The Real Madrid striker recently unveiled a statute of himself on the island of Madeira with the biggest bulge since Charlie Sheen was guest of honour at the Playboy Mansion.

The statue captures Ronaldo in his classic, pre-free-kick, cowboy stance standing behind the ball. There is no ball presumably because it's been shoved down Ronaldo's shorts.

But local reaction to the statue has been mixed. Portuguese men say the face looks nothing like Ronaldo. Portuguese women say they haven't noticed the face.

This article was first published on December 28, 2014.
Get The New Paper for more stories.