Before I Was Boss: Bridal boutique owner's mantra is to work hard for what you want 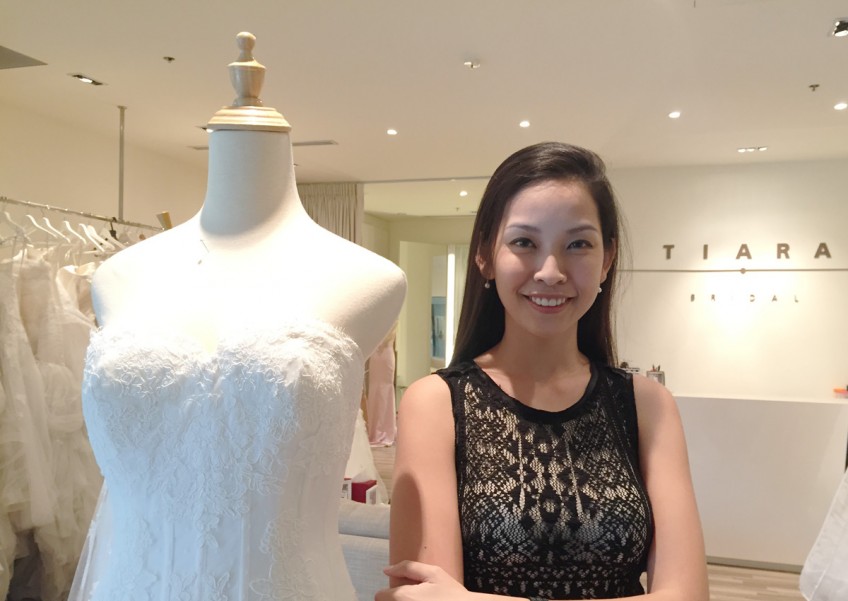 She was once the face of M1, appearing in the telco's commercials in newspapers, on buses and at M1 shops islandwide.

But that was in 2005 for the telco's advertising campaign, and at a time when Ms Lee Cheng Ling wanted to earn some extra pocket money as a first-year university student.

Going for a number of casting calls was all part of landing these part-time modelling jobs and Ms Lee, who is now 30, took it in her stride.

Ms Lee said: "I wanted to earn money and I thought that models earn big bucks so I wanted to tap on whatever qualities I had to earn bigger bucks than a waitress."

Today, she is the founder and owner of Tiara Bridal located at Delphi Orchard.

While she runs the successful boutique which specialises in multi-label designer wedding gowns and bespoke services, she learnt at a young age how hard work pays off.

She took on her first part-time stint at the age of 15 during the school holidays, waiting on tables at a Japanese restaurant in Tiong Bahru for three hours over lunch.

But Ms Lee did it anyway because she "wanted the taste of earning money" and to have an understanding of how hard her parents worked.

Besides, her parents were very supportive when they learnt that she wanted to work part-time and they told her to 'go for it'.

She told AsiaOne: "My dad took on five to six part-time jobs at a time. He worked very, very hard and he was the breadwinner (of the family) since young. My father was a coffee boy and he was in charge of throwing the trash. (But) he has his own business now and he always tells us how difficult life was back then. My dad is someone I admire a lot.

"So if there was anything that I learnt from that (waitressing), is that money is hard to earn."

It was this influence that set Ms Lee on a path of working hard through university, where she read Business at the Nanyang Technological University.

It was also during that time that Ms Lee took part in a couple of local beauty pageants.

In 2004 when she was 19, she took part in her first beauty competition, The New Paper New Face, hoping to gain more modelling jobs and exposure.

She became a finalist in the contest, and thinks the competition helped her bag the M1 commercial job.

Ms Lee said: "I landed two ads that paid me very well in that one year. One of it was by M1 and the other by AXA.

"When you get a good assignment, you're very well paid - could be up to a four-digit figure and that's a lot for a 20-year-old, and you don't get that all the time."

The following year in 2005, Ms Lee took part in the Miss Singapore Universe pageant along with the likes of Rebecca Lim and Jade Seah.

She later signed a contract with Mediacorp, which was what she wanted at the time.

Ms Lee said: "If I landed a job in Mediacorp, my income would be more stable - that was my goal in mind, which was still to make money. I hoped to milk it while I was still in university and then to discover whether it was suitable for me or not.  (I) didn't want to wait until I graduated to try, so I tried while I was still pursuing my degree as I felt that was the best time."

It was during her time at Mediacorp that she discovered her talents as an actress and host. Notable info-tainment shows that she hosted included Battle of the Best (强中自有强中手) and On the Beat (都是大发现).

Just before she graduated from university, she also starred in a local comedy by Kelvin Tong called Men in White, in which she played a sprightly female ghost.

But once her two years with Mediacorp was up, the former model-turned-actress-host took another decisive turn to become a banker instead pursuing a career in the entertainment business.

She said: "You can't decide how much you want to work (in showbiz). You may want to work very hard in the first five years of your career and build a solid foundation so that your career progression can be easier. That works in a corporate world, but not in the media world where you're an artiste. It's based on the opportunities that people decide to give you.

"I just thought that I could not leave my fate with people I didn't know, so I decided to do something more solid with my degree."

After six years in the banking industry, she quit to set up her own business after giving birth to her first child in 2012.

"Banking was lucrative and rewarding, but the hours are long. The work was demanding which was something I liked, but after I had my kid, I didn't I want to have that kind of lifestyle - not for the first few years in her life," said the mother of a toddler, Elizabeth, who is now almost four years old.

In fact, while shopping for her own wedding dress in 2011, Ms Lee realised a gap in the bridal gowns market.

She said: "I couldn't find anything suitable. There were either gowns that were not very pretty at a low price or really pretty gowns at an unaffordable price.

For her wedding, Ms Lee wore a Vera Wang dress shipped from the United States, and that gave her the idea to start a gown rental business, offering multi-label dresses to serve the middle-tier market - and that formed the basis of her business model for Tiara Bridal.

Looking back at the past decade of her life, Ms Lee has no regrets taking the diverse paths that she had chosen.

Having always had frontline jobs, Ms Lee feels that being personable makes a difference, especially at the workplace.

She said: "I think being sincere and humble helps whether you're a waitress, a TV host, or in my job now where I'm still serving customers."

When it comes to advice to part-time job-seekers, Ms Lee said: "Always try. You never know when you don't try. And be prepared to work very hard for what you want."

That has always been Ms Lee's mantra in life.

This 8-part #BeforeIWasBoss series is brought to you by FastJobs, your fast track to part-time and non-executive jobs. Visit www.fastjobs.sg or download the FastJobs app on your iPhone and Android smartphones.