'I will fry noodles until my hand cannot' 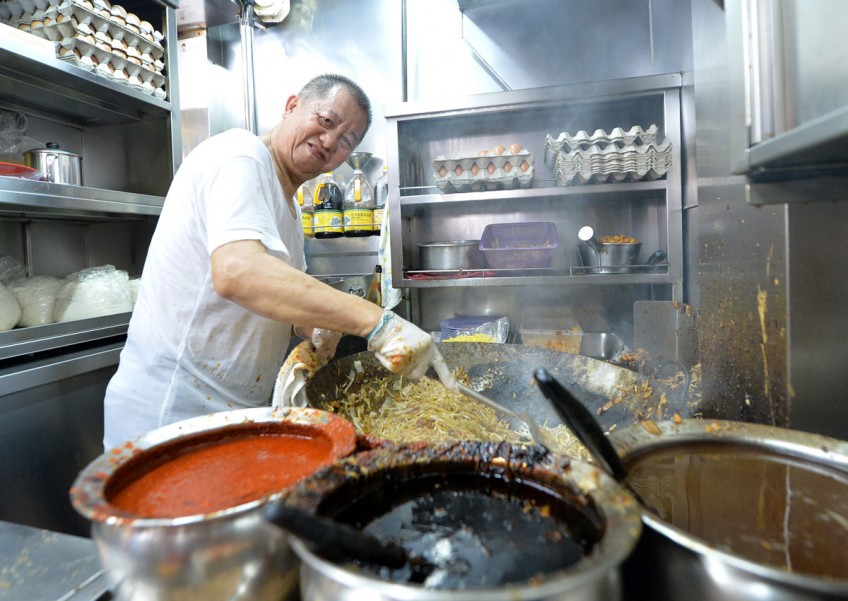 After 35 years of frying char kway teow, he still eats it every morning.

Mr Ng Chin Chye, 63, chuckled and told The New Paper: "To be able to cook char kway teow well, you must love eating it."

And cook it well he has.

Two weeks ago, Mr Ng was featured in a video on Tiger Beer's Facebook page.

On the filming of the video, he chuckled: "It was my first time seeing so many lights and cameras.

People in the hawker centre were staring at me."

His stall, Outram Park Fried Kway Teow, has been drawing a steady stream of customers since it moved to Hong Lim Market & Food Centre in 2000, when Mr Ng took over his father's business.

He blushed: "Some of his old customers tell me that my food tastes just as good as my father's."

Mr Ng's father started his business at Tanjong Pagar in 1953, later moving to Outram Park in 1972, before its present location.

"It makes me happy to think I am continuing his legacy well," said Mr Ng in Mandarin.

He has become an unwitting social media star after the video exploded online, as people have been going to his stall just to catch a glimpse of him. "But I do not have time to talk. The queues are just too long for me to break away," he said with a smile.

In the video, he is shown cutting fish cake and stirring chilli at 3am.

The queues start as early as 5am, when he serves taxi drivers, and goes on till 4pm, when he closes.

For $3, you get a plate of his much loved lardy goodness.

Mrs Amy Ong, 32, an office administrator, said: "His noodles have a certain 'wok taste'. Plus, he uses a lot of eggs and garlic, which give it a delicious fragrance."

In a day, he fries 72kg worth of noodles. But the tireless man is happy with his life and waking up at 2am every day.

"It has become a habit for me to wake up so early in the morning with my wife," he said.

Mr Ng's wife helps out at the stall every day.

But 20 years down the road, you might not get to eat his well-loved dish.

Mr Ng explained that his two sons, aged 30 and 32, are not interested in taking over the stall.

His younger son works at a bakery, and his older son studied in Nanyang Technological University and is working in the security industry.

He told The New Paper: "It would be such a pity if no one takes over my stall as the recipe was passed down from my father.

"He never taught me how to fry char kway teow. I simply learnt by watching him fry it every day."

Mr Ng added that he will not force his sons into taking over the business.

He said: "But I would be happy if they could as so many people already know of our stall. I want the business to be taken over by a family member."

Meanwhile, Mr Ng soldiers on, waking up at 2am every day from Mondays to Saturdays and going to bed at 7.30pm.

Mr Ng, who is diabetic, said: "I will keep frying char kway teow for as long as I can."

He said he hates to disappoint his regular customers, adding: "I will use every ounce of energy I have to keep cooking char kway teow."

He held up his right hand and chuckled: "Until this hand cannot fry noodles any more."

This article was first published on April 19, 2016.
Get The New Paper for more stories.