I'm not unhappy to move on from politics 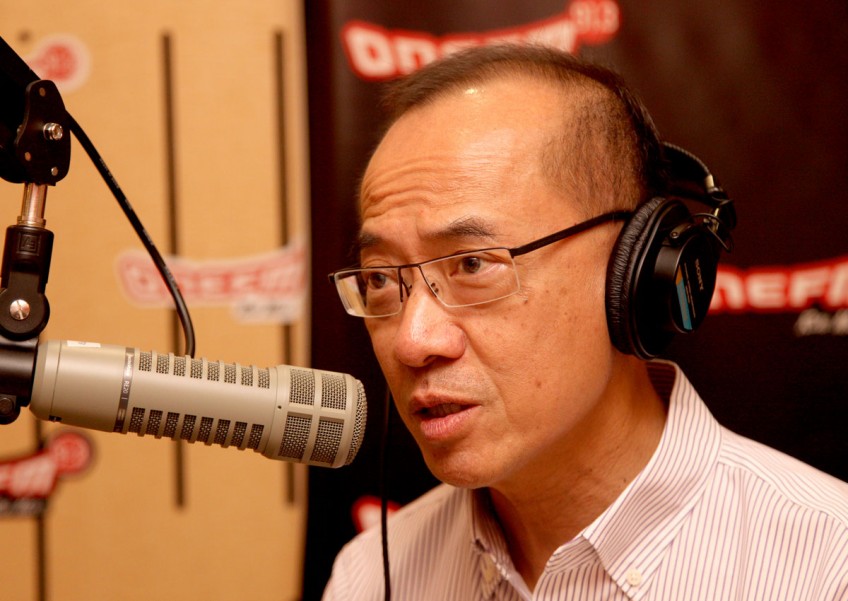 Former Foreign Affairs Minister George Yeo revisits the 2011 loss of Aljunied GRC and tells about why he takes selfies on his travels in an interview to publicise his book, George Yeo On Bonsai, Banyan And The Tao.

From time to time, his mind drifted back to that day in 2011 when he and his team lost Aljunied GRC.

The loss was so painful that no amount of mental preparation, which he had done beforehand, could cushion the blow.

"Many people had given me predictions, but there was one prediction which startled me, which naturally I remembered," Mr Yeo, 61, said.

In the introduction to his book, he revealed that a professional pollster friend had, after analysis, predicted that PAP would get 43 to 47 per cent of the vote in Aljunied. The final tally was 45 per cent.

"Of course, you never forget that moment in your life. I mean, it's part of my history," he said.

"I don't want to dwell on this subject. It's too much of a personal indulgence," he said.

Despite ending his 23-year political career, Mr Yeo is as busy as ever, thanks to the many hats he wears.

The chairman at Kerry Logistics is also the chancellor of India's Nalanda University and holds two Vatican appointments.

While there is considerable overlap in his current and previous commitments - dealing with people - the former Foreign Affairs Minister finds the stress "less insistent".

"In politics, you can be eating chicken rice in a hawker centre and someone comes up to you and engages you because he's got a problem.

"So you've got to stop eating and listen to him. You can't say, 'look I'm busy now, can you wait'? Or if he e-mails you, you have to respond," he said.

Mr Yeo does not see himself going back to parliamentary politics or feels that he is temperamentally suited for the role of President, he wrote in his book.

"Politics was interesting, no regrets about having taken that path. I'm very grateful for the opportunity to do this, (but) I am not unhappy to move on," he told TNP.

He travels so much for work that his family members, who are scattered in different parts of the world, can no longer keep up with his whereabouts.

The jetsetter shuttles between his homes in Singapore and Hong Kong, India and Vatican City.

"Whenever I take off, I'll take a selfie and put it into the family WhatsApp chat group," he said with a laugh.

"One of them said, 'one day we'll have an album with all these selfies'."

Mr Yeo, who has a daughter, 26, and three sons aged between 21 and 25, readily agreed that his wife is the one who keeps the family together.

With his children living in different countries, Mr Yeo said, the whole family comes together only once or twice a year, usually in summer or during the Christmas season.

Mr Yeo is a celebrity in his own right, with more than 94,000 followers on his public Facebook page and 5,000 friends, the maximum friend limit, on his private Facebook account.

Looking at the regular updates on his work and personal life since 2009, it is hard to tell that the 61-year-old was once resistant to social media.

"Initially, I said it's too difficult. Then my young friends said, 'don't worry, we'll help you'.

"For the first few weeks after they set it up, they gave me advice. They even crafted messages for me to approve. But it was so easy after a while and I said, 'Let me do it myself'," Mr Yeo said.

After he retired from politics, some friends advised him to "wind it down".

"But I thought, if you wind it down, people would say 'look, you only engage this because you needed our votes'. That won't do.

"In any case, it's a way for me to keep in touch with changing trends in social media and also with people.

"And most importantly, it's fun... It's now part of my life. And I'll be poorer for it not to have Facebook," he said.

The only time Mr Yeo kept a diary was when he was 29.

Reproduced in his book, it chronicles a family trip to his home village in China to visit his maternal grandparents in 1983.

He said he had to enlist his former secretary's help as "my handwriting is quite illegible". One or two parts could not be deciphered.

"And one remark which was a bit uncalled for, about a relative, which I had to expunge," he added.

How he proposed to his wife

"How did I propose? Nothing dramatic, nothing which smacks of great romanticism. We actually discussed it and she informed her parents, I informed mine," said Mr Yeo. He and his wife Jennifer have been married for 31 years.

The couple got married in Cambridge, Massachusetts, and held a wedding dinner of four tables in Boston's Chinatown.

Mr Yeo met his wife at a lecture in the National University of Singapore's law school, where she was an undergraduate.

"We met, I liked her, invited her out, and then we became, well, boyfriend-girlfriend," he said.

This article was first published on September 18, 2015.
Get The New Paper for more stories.