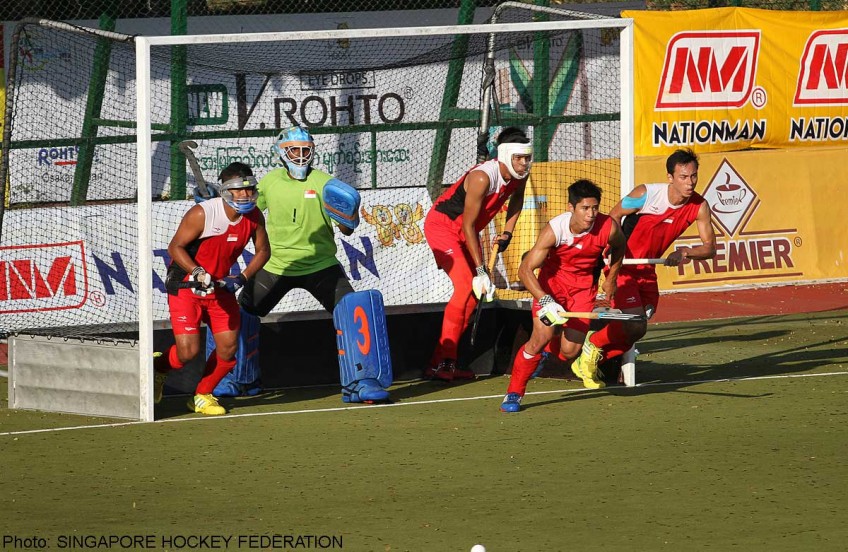 They qualified on merit for the Incheon Asian Games (Sept 19 to Oct 4) when they finished fourth at the Asian Games Hockey Qualifiers (AGHQ) in Bangladesh in March.

But Singapore's men's hockey team were not included in the final Asiad contingent, as the Singapore National Olympic Council (SNOC) requires teams to show that they are competitive against opponents ranked at least sixth in the region.

After two failed attempts in May, Solomon Casoojee's charges finally managed to beat Oman - Asia's sixth-ranked team - not once, but twice in the past week.

They clinched a morale-boosting 3-1 win last Saturday, and edged out the Middle East side 3-2 in the second match on Tuesday.

"Credit to the (Singapore Hockey Federation), it was receptive to the benchmarks set (by the SNOC), and went out to do what they had to do," SNOC secretary general Chris Chan told The New Paper yesterday.

"I can't speak for the selectors, but two consecutive victories are no fluke. We will circulate these results among the selectors, and I expect they will be supportive."

The SNOC has given teams until Aug 1 to submit results should they want to appeal to go to the Asiad, and the hockey boys seem to have met the requirements with some two weeks to spare.

Casoojee attributed the two wins to the hard work put in by the players, as well as those working around the team.

"Overall, we've installed big changes to improve consistency, conditioning and the structure of our play, and there has been a lot of hard work put in by everybody," he said.

Casoojee believes that his team have benefited from the International Hockey Federation's (FIH) move to change the match structure from two halves of 35 minutes to four 15-minute quarters, which are of higher intensity.

"We've tried to play this style over 35 minutes, and have fallen short towards the end of the game, but this system has definitely helped us," Casoojee said of the new format, which will be used for the first time at a major tournament in Incheon.

His team may have proven that they can match some of the best sides in Asia, but captain Enrico Marican feels that there is still room for improvement.

"We are improving every day and we've managed to get the job done, but we still need to get better and work on our fitness and tactical approach to games," said the 22-year-old, who led the national team to a silver medal at the South-east Asia Games last December.

"The mood in the team is very positive, and we're all excited about playing at the highest level in the region."

Casoojee will officially submit the results against Oman when the team return from Muscat today, and he hopes that his boys will earn the nod from the SNOC.

"I'm not going to celebrate going (to the Asiad) until I get a formal approval in writing," said the South African.

"There's not much we can do except train in Singapore, but we'll try to head to South Korea a week earlier (before the Asiad). I'm sure we can get some (tune-up) games."

I can't speak for the selectors, but two consecutive victories are no fluke. We will circulate these results among the selectors, and I expect they will be supportive. - SNOC secretary general Chris Chan, on the hockey team's (above) chances of going to the Incheon Asiad