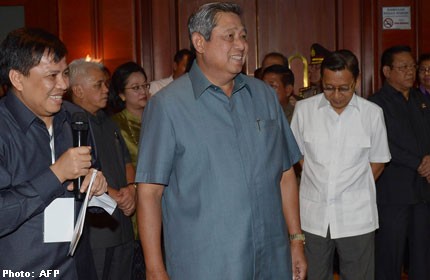 INDONESIA - Something quite astonishing has happened to Indonesia's political parties ahead of next year's general elections: An unprecedented 90 per cent of the candidates are incumbents. And all but a handful are standing in the electorates they currently represent.

How and why is difficult to explain. In previous elections - in 1999, 2004 and 2009 - there was a 70 per cent to 75 per cent turnover in each new Parliament. This was either because sitting legislators were dropped by their parties or failed to make the cut at the ballot box.

With the National Social Democrat Party the only newcomer, the new trend is remarkably uniform for all of the 11 other parties the National Election Commission (KPU) has cleared to contest the elections next April.

Theoretically at least, incumbents will be judged on their records and how well they have represented their constituents, an aspect of democracy that often seems to slip their attention once they are ensconced in Jakarta.

In 2004, 266 of the 550 sitting legislators from the first democratic elections in 1999 were replaced. It was a similar 52 per cent changeover in 2009, when Parliament was expanded to 560 members and the number of seat-winning parties fell from 16 to nine.

Interestingly, most of the incumbents are facing re-election in the same constituencies; in the last round, 69 sitting lawmakers changed districts. Similarly, while 20 incumbents switched parties in 2009, an even smaller number has done so this time.

Perhaps this can be partly explained by the evolution of Indonesia's electoral system. In December 2008, a Constitutional Court decision precipitated the shift from a semi-open to a fully open preferential system.

That made elections much more candidate-orientated, with name recognition an increasingly important factor. Hence the surfeit of incumbents and a healthy collection of celebrities, who may draw media criticism but are as qualified as anyone.

Sadly, electoral changes have yet to translate into new standards of quality and integrity. For all their degrees, laptops and smartphones, many of the new legislators who entered Parliament in 2009 have turned out to be a big disappointment.

Numbed into apathy by one graft case after another, voters have increasingly lost faith in their representatives - and in democracy in general. About 49 million, or 29 per cent of the electorate, failed to vote in 2009.

Compared with many other countries, including long-established democracies, that's not bad at all. But what concerns reformers is that the continuing loss of confidence may mean an even lower turnout next year.

The criticism is not always fair given the demands on their time, but the media loves to go after lawmakers for failing to meet unrealistic legislative targets. The local media also reports regularly on poor attendance records at rubber stamp plenary sessions and, more to the point, wasteful overseas junkets.

Still, with incumbents dominating party lists, what Indonesians may be able to look forward to this time is a Parliament that won't be full of political novices, easy meat for the bureaucrats drafting legislation and dictating policy.

The sagging fortunes of two of the major coalition parties will clearly have an impact. But next April's elections could still potentially see as much as 40 per cent to 45 per cent of the old Parliament returned.

According to most estimates, candidates will have to fork out between one billion rupiah (S$130,000) and five billion rupiah from their own pockets to have any chance of election victory, mostly because the campaign period will be longer than in 2009.

It's not always about buying votes. The money can easily be eaten up by constituent visits and the banners, T-shirts, advertisements and entertainment that are often far more important than what the candidate has to say at the hustings.

The latest Centre for Strategic and International Studies survey has Golkar and the Indonesian Democratic Party for Struggle (PDI-P) leading the pack, followed by the Greater Indonesian Movement Party (Gerindra) and the Democrat Party.

Wracked by corruption allegations, both President Susilo Bambang Yudhoyono's majority Democrats and the Islamic-based Justice and Prosperity Party (PKS) are expected to take a major hit at the polls.

The accepted wisdom among most analysts is that the three current front-runners all stand to be major beneficiaries of the Democrats' misfortunes, with the evergreen United Development Party (PPP) snatching Muslim votes away from the PKS.

But Dr Yudhoyono's personal popularity is still surprisingly high, particularly among dominant Javanese voters. So it may be too early to write off the Democrats as the single-digit spent force recent surveys suggest it will be.

With the President now at the helm, and party cadres focusing on whom he will choose as his prospective successor, the Democrats are clearly hoping to regain some ground over the next six months. Instead of coming clean on the beef-and-sex scandal that has effectively shredded its image, the PKS, on the other hand, seems intent on digging an even bigger hole for itself. When rank hypocrisy is involved, the fall is all that much harder.