Internet services still down for many SingTel customers 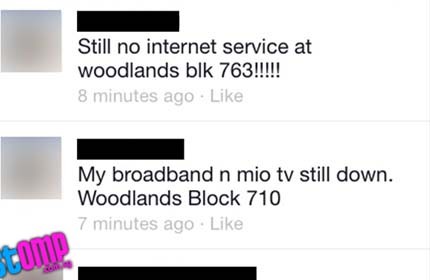 SINGAPORE - Customers are still having problems connecting to the Internet, one day after it was reported that internet services were fully restored for 60,000 SingTel customers.

SingTel broadband customers were cut off from the Internet due to a fire at Bukit Panjang that damaged 149 cables.

The fire had occurred at one of SingTel's major Internet exchanges on Wednesday afternoon (Oct 9), and damaged both SingTel and OpenNet's cables.

Cherry, a contributor who wrote in to citizen journalism site Stomp, says a large number of people are still having problems with their internet, judging by the complaints being posted on Facebook.

"SingTel released news that all damaged cables were reconnected by 7.15am on October 11, yet a large number of people are still facing issues connecting to the internet.

"When we called up the support hotline, we were told that the cables are actually still under repair.

"They told us the technician will call us back in 2 hours, but this did not happen.

"It's been 2 days without the internet, affecting both work and studies, how are they going to compensate us?"