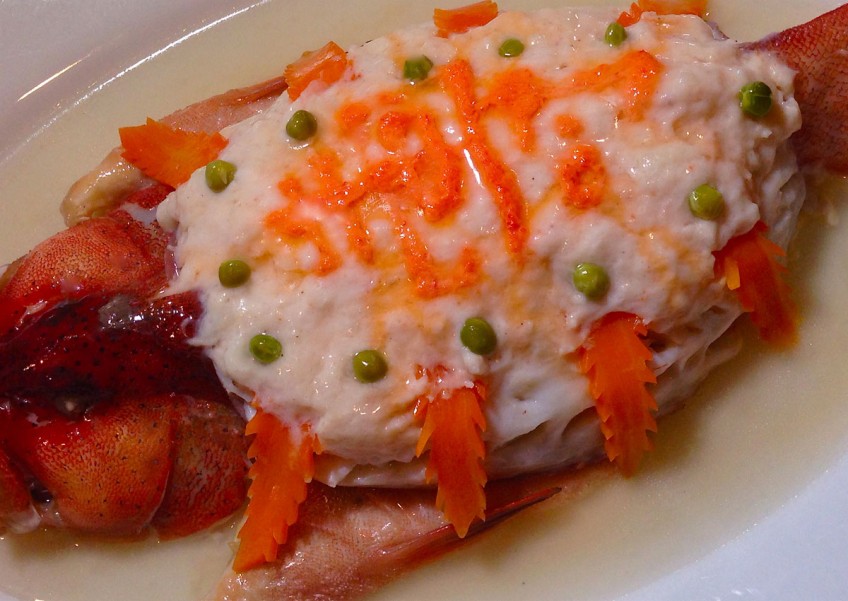 A dish served only at formal dinners before the 1970s and particularly laborious to prepare, it was "resurrected" by Masterchef Sin Leong. The garoupa is completely deboned, leaving only the head and skin.

The flesh is then mixed with prawn and pork fat and made into paste, then reshaped as the body of the fish and laid on the skin. This dish emphasizes the different "sweetness" of fish, prawn and pork when eaten. Its decoration of carrots, green peas, and the Chinese character "longevity" written entirely in prawn roe, makes it a most auspicious dish for celebrating birthdays. Masterchef Sin Leong recreates another traditional dish whose origins can be traced back to pre-Communist Guangzhou. Its poetic Chinese name "Phoenix swallowed Swallow" literally describes the dish's structure, in which the cavity of a chicken is packed with bird's nest before being double-boiled in superior stock for hours.

A hard-boiled egg is also added into the stuffing, elevating the "sweetness" of the chicken stock against the otherwise tasteless bird's nest. The excess bird's nest is mixed with egg white and steamed into the shape of a teardrop for decoration. Chef Tonny Chan was once given a packet of dark-coloured sugar with an interesting provenance. It came from a tiny village near Wenchang in Hainan island, which drew its main agricultural income from growing black sugar cane. At the annual harvest, some sugar cane would be set aside, pressed, and the juice boiled and processed into sugar.

This highly prized, artisanal sugar would then be used specially for making nian gao as an offering to the celestial gods. Chef Chan has personalised his own version of the nian gao by incorporating osmanthus flower into the rich and robust rice cake and giving it a pleasant floral aftertaste. This is no ordinary crab roe; known as li yun zi, it is the roe of the mangrove crab, a creature the size of half a human palm.

During the short mating season in April, the female crabs would literally be bursting with roe sticking to their outer belly shell. But as these crabs are extremely shy, catching them one by one requires patience and technique; and because of their muddy habitat, washing them after capture results in high wastage of roe.

On average, only 10 per cent of roe is usable after processing. Chef Tonny Chan was handed a bottle of the roe and commissioned to cook it at dinner so he opted to present it with the Wensi tofu. This famous dish from Yangzhou requires the chef to expertly "chop" the soft tofu into thread-like slivers and lightly cook them in superior stock. The li yun zi, which has a unique rich taste of yolk, is then spread on top of the soup.

This article was first published on May 7, 2016.
Get The Business Times for more stories.