Is it worth the expense? 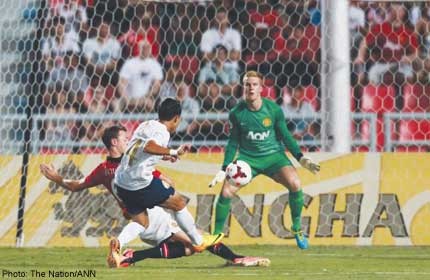 There is too much hype about the ongoing football fiesta. Some say this is a unique opportunity for Thailand, hosting four matches featuring four of Europe's most famous clubs. However, one question that began to creep into mind is whether the gains for the country are worth the large amount of money spent bringing these teams to Bangkok.

Never before has Thailand had a chance to host four European clubs in the same year even though the country, known for its fervent passion for European football, particularly the English Premier League, has hosted exhibition events on a regular basis.

Football fans in other countries could certainly be jealous of us for getting a chance to watch world-class players from such elite clubs -EPL champions Manchester United, Europa League winners Chelsea, five-time European champions Liverpool and Spanish giants Barcelona - in a span of barely a month.

No one would deny that visits by such famous teams will help raise the profile of the country, but it also raises questions whether we have been excessive in bringing four top European clubs in a single year. It makes us revisit an old issue - is bringing these teams here for a just brief stay worth the money organisers pay for this?

Not so long ago, European clubs faced widespread criticism for heading off abroad for exhibition matches that many regard as little more than money-making exercises. It became common practice for popular clubs, who found that overseas trips were a new stream of cash that earned them huge appearance fees. The host country, though, barely gains anything other than 90 minutes of entertainment on the pitch.

Although the situation has significantly improved recently, as many clubs have shown greater care of what a local community can gain from their trip, some believe they could still do more than just simply holding a brief clinic for children.

This issue came into sharp focus again after Singha Corporation revealed they paid around Bt400 million for the visit by Manchester United and Chelsea, with whom they have lucrative sponsorship contracts as global partners. It meant the total cost for bringing the four clubs to Thailand could be just short of Bt1 billion.

But that sort of money could yield a massive improvement to Thai football if spent on facilities or local development.

Would it not be wiser to spend such vast sums on something more tangible than just brief appearances by star players?

For Singha, though, this was money well spent - despite being well aware that holding both Man United and Chelsea fixtures to mark the 80th Anniversary of Boon Rawd Brewery would incur a huge loss.

"We would never make profit from holding an exhibition game in our country. Even though tickets for the United game were sold out within four hours of going on sale. What we earnt from counter sales barely made up for the expenses," Jaturon Himathon-gkom, Singha's international sports marketing director, said. "In other countries like Japan, it would be easier to earn a profit, with bigger stadiums and higher average prices for tickets. Nobody wants to do business when there is a bleak prospect of making profit. And that's why the last visit by Man United was some 12 years ago.

"For us, this is not about business - it's all about 'branding' or something about marketing. And, we arranged these two games to mark the 80th anniversary. So, we're ready to make some sacrifice and put up with the losses," he said.

Asked whether helping the development of a sport in the country would be a better way to spend the money, Jaturon was quick to remind that the company pays large sums each year to many national sports associations.

"In golf, can you name a player that we haven't given support? And, in many cases, we're the first to offer a helping hand."

When asked whether the company considered the "legacy" left behind by the clubs for the community, Jaturon said he believed it was the responsibility of football authorities to make the most of visits by top teams.

"It's the responsibility of the national football governing body, not us, to think how we can get benefit from the clubs' visit.

"Being in the private sector we are not in a position to order them to do this or that. [But] we're ready to facilitate them to gain as much as possible when the teams are

here. There's been no such talk yet so far."

With fans still complaining about the visit of a United side devoid of star players, it remains to be seen how much the country will gain from hosting the three other high-profile matches, starting with London side Chelsea this Wednesday, followed by Liverpool on July 28, and Barcelona on August 7.