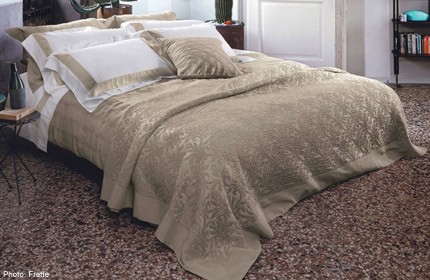 MILAN - Private equity group Change Capital Partners has bought a majority stake in Italian luxury linen maker Frette for an undisclosed sum, aiming to revive sales at the brand that has kitted out royalty, top hotels and oceans liners.

Change Capital said it would inject cash into Frette to help the company to grow.

JH Partners, Frette's US-based owners, will retain a minority stake in the business. The financial details of the deal were not disclosed.

Founded in 1860 and based in Monza, near Milan, Frette had consolidated sales of 90 million euros in 2013 through stores in Paris, Moscow, New York and Hong Kong.

Change Capital estimated the global luxury bed linen market at more than 1.2 billion euros and said this market would benefit from the continued growth in emerging market customer demand.

London-based Change Capital also said it had identified Italy as one of its main growth markets. Its recent deals there have included the takeover of restaurant group Vesevo, since renamed Sebeto, which also owns the pizzeria-chain Rossopomodoro.