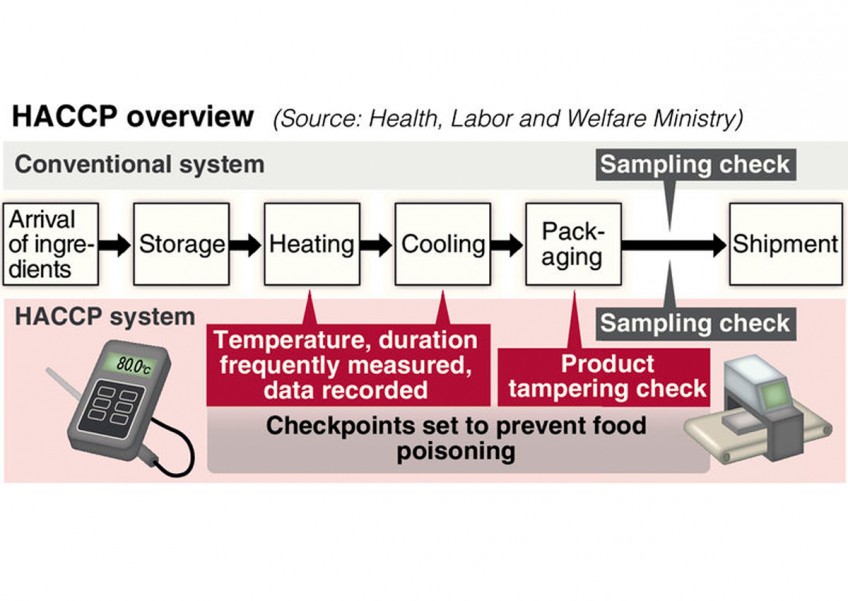 The Health, Labor and Welfare Ministry has decided to require food makers and other food-related companies to incrementally implement the hazard analysis and critical control point (HACCP) system, which is the international standard for food safety controls.

Among small and midsize companies in the industry, only about 30 per cent have introduced the HACCP system.

Also, to demonstrate the safety of Japanese foods overseas ahead of the 2020 Tokyo Olympic and Paralympic Games, the ministry has determined that shifting to an internationally trusted food sanitation control system is an urgent task.

The HACCP is a system first developed in the United States in the 1960s to ensure the safety of space food.

The main features of the food safety system are thorough checks and record-keeping so that heating temperatures in the commercial preparation of food products are sufficient and foods are not tampered with.

In Japan, production standards for heating temperature, heating time and some other details are set for meat and fisheries products. But how to check whether the safety standards are followed is not specified.

Confirmation of the safety of such products has relied on sampling checks on parts of the products, which is required by business operators under the Food Sanitation Law.

One company that produces fish cakes voluntarily introduced the HACCP system because if heating in steamers is insufficient, germs that can cause food poisoning may remain in kamaboko fish cakes and other products.

For this reason, workers at the company insert thermometers into the central parts of the products to confirm that standards, such as "heating at 80 C for 20 minutes," have been fulfilled.

Food makers following the standard also use metal detectors to check whether their products have been tampered with. If the companies notice something abnormal, they can stop shipments. Also, record-keeping makes it easy to find the cause of any problems.

A uniform guideline for methods used in the HACCP system was presented in 1993 by the Codex Alimentarius, an international food safety commission.

The health ministry has encouraged companies to obtain HACCP certificates for certain products involving milk, meat and other foods by establishing its own certification system.

Local governments and food industry associations also have similar certification systems. If the HACCP system is mandated, local public health centres and other authorities will check to ensure the system is implemented.

According to research by the Agriculture, Forestry and Fisheries Ministry, 87 per cent of major companies with food product sales of ¥5 billion (S$61 million) or more in fiscal 2014 had introduced the HACCP system.

In the United States and European countries, makers of meat and fisheries products have been required to adopt the standard since the 1990s.

When the Trans-Pacific Partnership (TPP) free trade agreement goes into effect, imports and exports of food products are expected to increase, as tariffs on them will be abolished or lowered.

For Japanese companies wishing to export foods such as meat to the United States and Canada, implementation of the HACCP system will be required.

If the current situation continues, the HACCP may be an obstacle for Japanese small and midsize companies hoping to increase exports of their products.