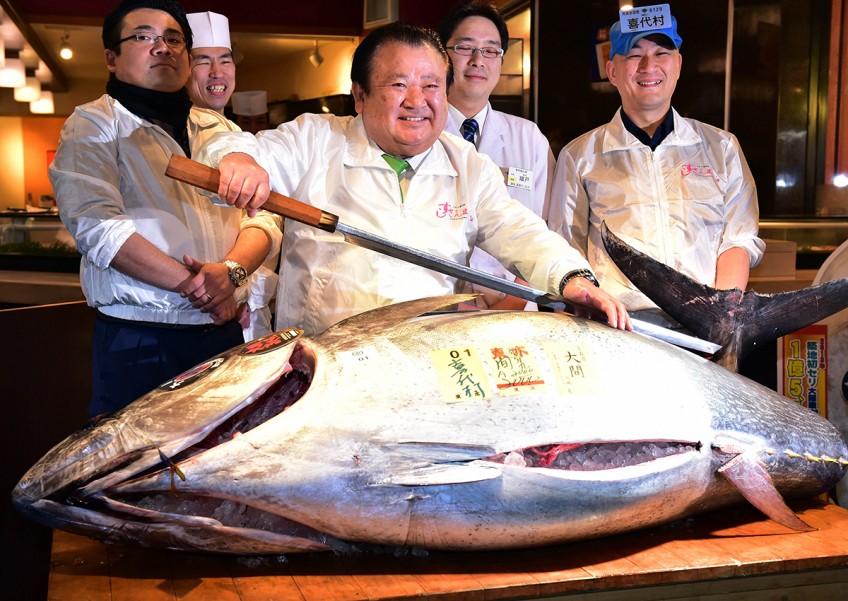 TOKYO - A Japanese sushi boss paid more than US$117,000 (S$166,620) Tuesday for a giant bluefin tuna as Tokyo's Tsukiji fish market held its last New Year auction ahead of a much-needed modernisation move.

Bidding stopped at a whopping 14 million yen for the enormous 200-kilogram (440-pound) fish - a threatened species - that was caught off Japan's northern coast.

The price was three times higher than last year but still far below a record 155.4 million yen (S$1.8 million) paid by the sushi chain operator in 2013 - when a Hong Kong restaurant chain weighed in and drove up bidding - for a slightly larger fish of similar quality.

The New Year auction is a traditional feature at Tsukiji, where bidders pay way over the odds for the prestige of buying the first fish of the year.

But it came as Japan, the world's largest consumer of bluefin tuna, faces growing calls for a trade ban on the species, which environmentalists warn is on its way to extinction.

The population of Pacific bluefin tuna is set to keep declining "even if governments ensure existing management measures are fully implemented", Amanda Nickson, director of Global Tuna Conservation at the Pew Charitable Trusts, said in a release.

Bluefin is usually the most expensive fish available at Tsukiji, the biggest fish and wholesale seafood market in the world.

A single piece of "otoro", or the fish's fatty underbelly, can cost up to several thousand yen at high-end Tokyo restaurants.

"Given the already dire state of the population - decimated to just four per cent of unfished levels - it is of particular concern that the auction price is rising again," Nickson added.

"The international community must let the Japanese government know that additional action is needed to save this species."

Tuesday's auction winner, Kiyoshi Kimura, president of the firm behind the popular Sushi-Zanmai restaurant chain, said he was "glad to make a winning bid in the last New Year auction at Tsukiji." Kimura has won the bidding every year since 2012.

Tsukiji - a sprawling complex of tiny stalls and wholesalers popular with tourists - will end its eight-decade history this year when it is relocated to a modern facility in Toyosu, a few kilometres (miles) away.