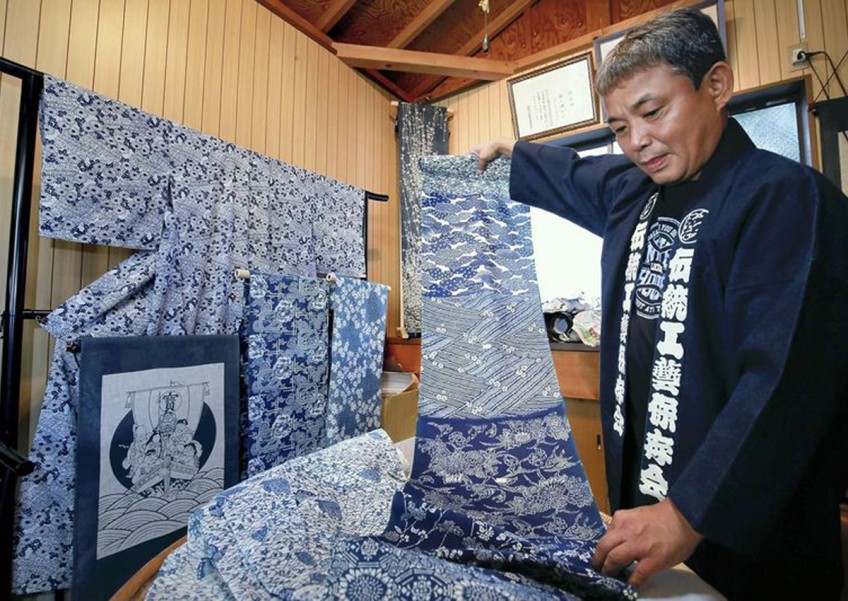 The Aizome Hakubutsukan (Indigo-dyeing museum), with a floor space of only a little more than 20 square metres, houses many items, including hanten short coats, yukata and uncut cotton yukata fabric. All have been indigo-dyed at an atelier run by a family specialising in the process. The history of these pieces spans three generations and more than a century.

The museum was opened in 2000 by the father of Yukihiro Fujisawa, the current head of the family, within the premises of their atelier in Tokyo's Sumida Ward. It is one of the "small museums," often within private premises, designated by the local ward government to promote local industries and culture through the products they display, the tools they use and also through practical workshops.

Indigo-dyed yukata gained popularity during the Edo period (1603-1867). Because the Tokugawa shogunate restrained commoners from wearing silk kimono and other forms of luxurious clothing, craftspeople began rendering delicate motifs on yukata - in purely white and indigo blue - to give their wearers a modest look.

The nagaita-zome dyeing technique, which results in a perfectly symmetrical motif on both sides of the cloth, was also developed at that time by skilled craftspeople. Some of the fabrics on display at the museum are good examples of nagaita-zome - in fact, both sides are so identical that they resemble openwork done on an indigo background. How skillful these manufacturers were!

"Although not high-profile, the delicate handwork of craftspeople represents the sophistication of old Edo culture," said Fujisawa, 56, who also heads the museum. "I hope people come here to appreciate it."

The museum also preserves about 10,000 paper stencil patterns for tracing motifs on fabrics, with the oldest ones dating back to the early Meiji era (1868-1912). These sheets of washi Japanese paper, bearing such motifs as butterflies and flowers, are breathtakingly beautiful, like pieces of art.

Up until the mid-1960s, according to Fujisawa, such stencil paper patterns for various motifs were brought to the atelier each year by artisans. Sample yukata cloths were dyed using them, and then taken to wholesalers in Tokyo's Nihonbashi district, who would choose some they believed to be trendy of the year from among the motifs.

Today, the number of paper stencil artisans has decreased in line with the falling numbers of indigo-dyeing craftspeople, and consequently such paper patterns with elaborate motifs are rarely seen.

Visitors can better appreciate the beauty of indigo-dyeing by attending a workshop in which they can hand-dye a handkerchief. You can choose which parts of your cloth you want to dye before tying it with rubber bands and soaking it in a tank of indigo dye. Indigo dye oxidizes and produces colour when exposed to air, Fujisawa said. When I lifted the handkerchief out of the tank, the colour changed from white to green, and then to blue, all within a minute. Upon drying, the colour became a natural, warm indigo blue.

As time passes, the colors of hand-dyed fabrics become deeper as the dye is absorbed further into the fibers, according to Fujisawa. "Their hues change and become more attractive the longer you use them," Fujisawa said. "I want people to experience the joy of having something genuine."

The museum is open from 1 p.m. to 5 p.m. on weekdays. Reservations are necessary for visits on weekends and national holidays. Admission is free. The hand-dyeing workshop costs ¥1,500 per person. Call (03) 3611-6760 for more information.