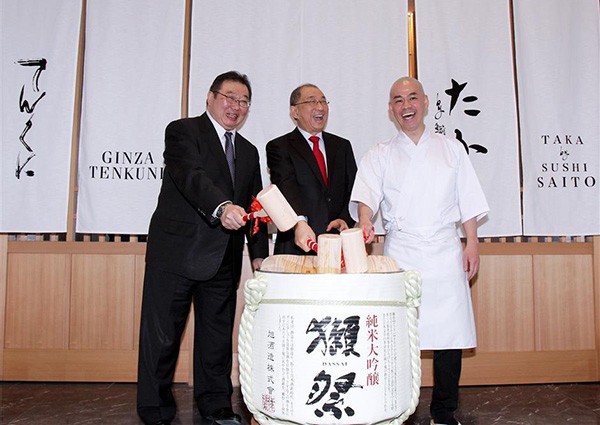 Saito is the youngest sushi chef to be awarded three stars and Sushi Saito is one of only three three-star rated sushi bars in the world. Ginza Tenkuni has been serving Edo-style tempura in Tokyo, the food capital of Japan, since 1885.

Taka By Sushi Saito is Malaysia's first restaurant by a three Michelin-starred chef and Ginza Tenkuni is the first fine-dine tempura specialist restaurant.

Taka seats 16 at the traditional sushi counter fashioned out of 300-year-old hinoki wood and the tempura counter seats 12.

Diners at the U-shaped sushi counter will be served by two Japanese sushi chefs according to the ideal ratio of one chef to eight diners.

Apart from the two counters serving omakase only menus, there are eight private rooms - serving sushi, tempura and traditional Japanese washoku dishes - adding to a total capacity of 82. The spacious, sectionalised and roomed-in layout lends the restaurant an air of exclusivity and privacy.

The elegantly designed 3,719 sq ft restaurant is fitted out with walls of woven mat and hand-painted, lacquered doors and features floor-to-high ceiling glass windows that afford views of the Sentral district.

While the restaurants on Floor 3A are open for business as of April 1, the six-star hotel will only be open on May 1, 2016. The 48-storey building also incorporates luxurious residences with bespoke services on the upper floors.