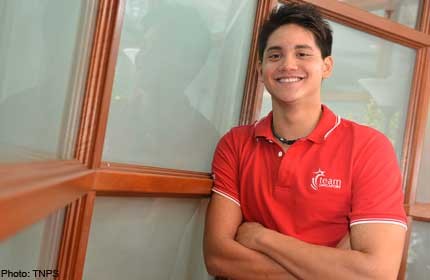 It is the most by a Singaporean male swimmer at a Games.

Joseph Schooling (above) aims to break that mark this year.

Schooling can win seven gold medals at the SEA Games in Naypyidaw, Myanmar from Dec 11 to 22.

Speaking to The New Paper yesterday, after a Team Singapore advertisement campaign photoshoot in Marine Parade, Schooling said: "I am swimming in four individual events and we have a good relay team. I am not saying that we have (the relay golds) in the bag, but I am confident.

"Knowing that I have done well on the world stage gives me so much confidence for the SEA Games, and all I want to do is to bring back as many gold medals as I can.

"Golds in all my seven events would be phenomenal." Schooling will compete in four individual events - 100m and 200m butterfly, 200m individual medley (IM) and 200m freestyle - and will also be a part of the 4x100m and 4x200m freestyle relays, as well as the 4x100m medley relay.

Based in Florida, the 18-year-old Bolles School student qualified for the semi-finals of the 200m fly and 200m IM at last month's World Championships in Barcelona, clocking new national record times in the process.

Touted as the next big thing in Singapore swimming, Schooling made a huge splash at the 2011 SEA Games when he met the 'A' qualifying mark for the 2012 Olympics in the 200m fly, posting a new national record of 1min 56.67sec en route to gold.

He lowered that mark at this year's world championships when he clocked 1:56.27.

Beyond this year's SEA Games, the former Anglo- Chinese School student is aiming to make hay at the Asian Games next year in Incheon, South Korea.

Based on season-best timings, Schooling is ranked third in the 100m fly on the continent, behind China's Zhou Jiawei and South Korea's Takuro Fujii.

He is ranked seventh in the 200m fly, but finished fourth among Asian swimmers last month in Barcelona, after China's Wu Peng and Chen Yin, and Japan's Yuki Kobori.

"My own expectation is I want a medal, and I feel I have a good shot at doing well in all my fly events.

Asked if a gold medal is within reach, given his progress under his coach Sergio Lopez at Bolles, he said: "Anything is possible, when you aim high and even if you miss by a little bit you're still pretty up there.

"My goal is always to win gold medals, set records and personal best timings. Those are what I shoot for each time I dive into the pool."

The 1.84m-tall swimmer, who is still undergoing a growth spurt, believes he does not need drastic changes to move on to the next level.

He said: "Right now I just have to carry on my training with Sergio; I've trusted him 100 per cent and he hasn't led me astray and he will never do that.

"You've just got to do what you have to do, it's not hard unless you make it hard."

He will fly back to Florida on Sunday morning and start school on Tuesday, after a short break here following the world championships.

In addition to training and studies, he will ponder his college options and make a decision by the end of the year.

He has shortlisted five universities and is set to whittle the list down further in the coming weeks. Said Schooling: "People have been asking me about the swimming programmes, but they don't ask about the academic aspect. My studies are equally, if not more, important than my swimming career.

"All my shortlisted schools are top colleges and I am very lucky to be able to choose from this list.

"I haven't decided what course I want to take yet, it could be business finance or accounting, or sports psychology."

HE MAY be based in the United States, but Singapore remains close to Joseph Schooling's heart.

The strong bond with his country has been formed through the usual route of family and friends, and also through Singaporeans like Tan Toh Huat.

The 62-year-old hawker, who runs a drink stall in Marine Terrace, was among more than 10 people involved in a photoshoot yesterday for a new Team Singapore campaign for the South-east Asia (SEA) Games in Myanmar.

Speaking in Mandarin, Tan said: "I knew Joseph since he was eight or nine; he has some relatives staying in the area and his parents used to bring him here to eat and order 'iced Milo dinosaur'. "He went overseas to study a few years ago and when he came back I couldn't recognise him.

Then I was reading the papers in 2011 when they were introducing our athletes for the SEA Games and I thought this swimmer looked like him.

"When he and his family came to the hawker centre I asked them about it," said the avid sports fan, who recalled how he quickly finished his dinners to catch the SEA Games swimming finals that year.

"I am very happy that he got good results at the recent world championships and that he has no airs despite being famous now.

He is an outstanding young man who has sacrificed so much to do well, so as Singaporeans we must do our part to support them." About the ad campaign, Schooling said: "These aren't just hawkers, they're more family and friends and have all contributed to my childhood.

"I have to be on the ball in the US with my racing, training and school throughout the year, but when I am back here I have a bit of time to relax and spend time with my family and fiends.

"Singapore is like my escape... because this is my home." He recalled how a fruit stall auntie in Bedok used to give him money for kiddy rides, and how the owner of a vegetable stall used to pass him washed raw broccoli and cauliflower to munch on as a child.

Asked what dish he misses the most, the 18-year-old said: "Chai tao kueh (carrot cake), hands down. My mum tried to cook it for me in the States but it didn't really work, but it was still better than nothing.

"It was the first thing that I ate when I came back from Barcelona and I like it with a lot of the black sauce," added the Bolles School student, who also loves roti prata and Samy's Curry.