Joseph's back with a vengeance 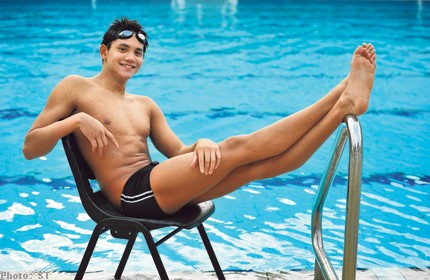 Joseph Schooling made it to the semi-finals in the 200m butterfly and 200m individual medley in the world championships. He can now lie back and enjoy a well-earned holiday here before he returns to the US and prepares for the SEA and Asian Games.

SINGAPORE - It is the end of Ramadan, a year since he last returned home, and Joseph Schooling is digging into a plate of nasi briyani.

Savouring this South Asian dish on this day is an annual tradition for his spice-loving family at their friend's home.

But, for the swimmer, the Basmati rice is especially fragrant this year.

This was a homecoming that the 18-year-old has been waiting for - a triumphant return from a well-fought campaign at the recent world championships in Barcelona.

He qualified for the semi-finals in the 200m butterfly and 200m individual medley - as the youngest competitor in both - and also broke his own national record in both events.

Said the Florida-based schoolboy on Thursday: "I consider this my first real break-out meet at a big international event and I feel a lot more relaxed now."

For Joseph, who also participated in last year's Olympics, the ghost of London 2012 has finally been laid to rest.

At the Games, the young swimmer's confidence took a battering. His debut was marred by a highly publicised cap-and-goggles fiasco - which resulted in him clocking two seconds off his personal best to miss out on a place in the 200m fly semi-finals.

His equipment was deemed not acceptable.

He also had to cope with the naysayers who questioned why he was unable to put the distraction behind him, even though he was only 17 at the time.

Said Joseph, a Year 12 student at the Bolles School, whose swimming programme is recognised as one of the best in the United States: "When I came back last year, it felt different since I didn't do well at the Olympics.

"It's always different whenever I come home, and, from the swimming point of view, I've moved up since the Olympics.

"I'm moving in the right direction."

Based on recent times in Barcelona, Joseph now stands in good stead to become the first Singaporean male swimmer to win a medal at the Asian Games in more than 20 years. The last to do so was Ang Peng Siong, who was second in the 50m freestyle in Beijing in 1990.

In Barcelona, there were three Asians - China's Wu Peng and Chen Yin, as well as Japan's Yuki Kobori - who went faster than Joseph's 1min 56.27sec in the 200m fly.

Given that the top names in the discipline featured at the Palau Sant Jordi pool, Wu's exit means Joseph is the third-fastest fly specialist in Asia leading to next year's Incheon Games.

Said the Singaporean: "We have over a year to go before the Asian Games and, at the rate I'm going, I've a good chance of winning a medal there."

But he knows improvements will have to be made before he gets to stand on the podium in Myanmar, where he could win up to six golds at December's SEA Games, and South Korea.

His coach Sergio Lopez noted that, as the teenager is in the middle of a growth spurt - he has bulked up by 4kg since January - there is a need to keep honing his technique to suit his developing physique.

Said Lopez: "His turns are good. But we need to adapt his approach into the turns - he sometimes glides too long before it.

"Whether it's taking longer or shorter strokes, we need to adapt his approach so that he gets the right speed when he reaches the wall."

There will be adjustments to make, new techniques to learn and many more laps to swim.

But for now - at least until he returns to Florida in a week's time - there are movies to watch, old friends to meet and family time to catch up on.

Because, even as the scent of glory in Myanmar and South Korea beckons in the distance, the only things that matter now are papadums and briyani.