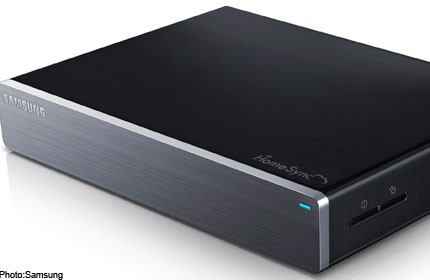 Do not underestimate the Samsung HomeSync as it is more than just a media player.

The media player has two USB 3.0 ports for you to plug in an external hard disk drive or USB drive to expand its internal storage.

HomeSync has an 8GB flash storage and a 1TB hard disk drive to house an extensive collection of movies, photos and music.

Connect it to any TV set via its HDMI port and you will unleash its full potential. Before doing that, you will need to set it up with a Samsung smartphone or tablet, along with the Samsung HomeSync app from the Google Play Store.

Only certain Samsung devices are compatible with the HomeSync app. This includes the latest Galaxy S4 and Galaxy Mega with LTE (which was used to test HomeSync).

Set-up is a simple affair with the help of Near Field Communication (NFC). With NFC activated, all I had to do was tap the Galaxy Mega against the NFC logo on the HomeSync to trigger the Bluetooth connection on both devices and initiate the wireless connection.

Once the connection was established, Google's latest Android operating system came up on screen, and the first thing I noticed was a dash of Samsung's TouchWiz user interface. It categorises the media player's files into music, video, photo, document or all files.

A private folder keeps prying eyes out and requires passwords - of your smartphone and any other device connected to HomeSync - in order to access files within the folder.

Up to eight users can access the HomeSync and upload files from their devices. But each needs to sign up for a Samsung account, which must be registered on the HomeSync player before access is allowed.

As it runs on Android, you can download more apps via the Google Play Store. Oddly enough, it would not let me download the Facebook and Twitter apps to the media player. For a social network addict like me, this is a potential deal-breaker.

You can mirror the smartphone's user interface on the TV via the HomeSync media player.

The mirroring experience is seamless and smooth. In this way, wirelessly, I can check my e-mail or stream movies from anywhere in the living room on the big screen.

If you are heavily invested in Samsung TVs, smartphones and notebooks, add this media hub to complete the ecosystem.