July 19 Some pram pushers have 'inflated sense of entitlement' 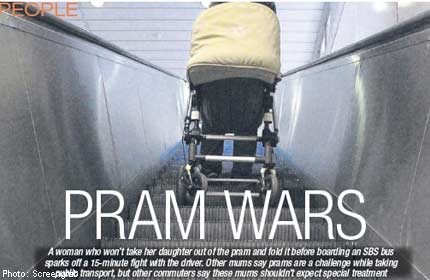 While I sympathise with parents who find it a challenge to take their tots out in strollers, I must say that like others interviewed in your article "Pram Wars" (The New Paper on Sunday, July 14), the commiseration evaporates in the case of some parents who have an inflated sense of entitlement.

It's not hard to spot them - they wield their prams like bulldozers to steamroll a path before them, not caring if they run over someone.

In lifts, they refuse to make way for others to get out or enter once they are ensconced within.

It is as if a child in the stroller gives them carte blanche to claim the right of way.

In some cases, the occupant looks over-aged for such a contraption and could jolly well do without assisted perambulation.

In short, it all boils down to common sense and consideration.

Crowded areas, notably shopping centres, are just not the kind of places small children should be taken.

If need be, it's best to take them there by bus or train during off-peak hours.

Or as writer Melvin Singh mentioned in "Pushing your pram and your agenda" (TNPS, July 14), a baby carrier or sarong is a far more sensible mode of transporting a tyke.

There is no risk of losing control over it or jeopardising the child's safety on escalators, public transport or in lifts.

If one is simply unable to show consideration towards others, the safety and well-being of one's own child should hopefully be motivation enough for parents to re-think their dependence on strollers.